Batticaloa airport to be International airport 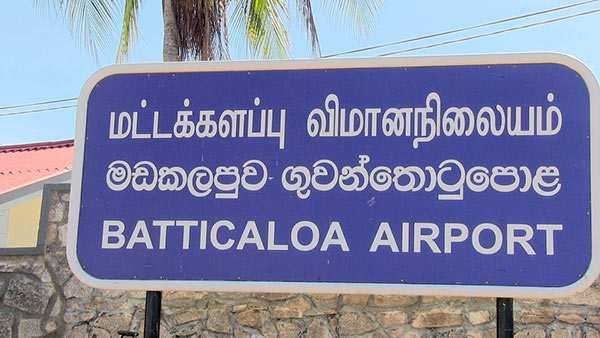 Minister of Industrial Export, Investment Promotion, Tourism and Aviation, Prasanna Ranatunga says that the Batticaloa Airport will be developed as an international airport.

Minister Ranatunga said the Indian government has also extended its fullest cooperation to develop the domestic airport and it has been discussed with the Indian High Commissioner in Sri Lanka Taranjit Singh Sandhu recently.

The Minister has already requested the Civil Aviation Authority for a report on measures to be taken to develop the Batticaloa Airport as an international airport and on the areas to be developed at the airport.

Batticaloa Airport was established in 1958 by the Department of Civil Aviation. Due to the situation prevailed in the country, the Sri Lanka Air Force took over the airport on March 27, 1983 and operated as a base for the Sri Lanka Air Force.The previous government spent 1.4 billion rupees for the re-construction of Batticaloa Domestic Airport after its operations and maintenance were vested with the Civil Aviation Authority (CAA) from May 31, 2016.

The airport reopened for civil aviation on March 25, 2018 and currently operates daily domestic flights from 8 am to 6 pm.The cabinet of the previous government has approved the development of the Batticaloa Airport as an international airport.

1 Response to Batticaloa airport to be International airport