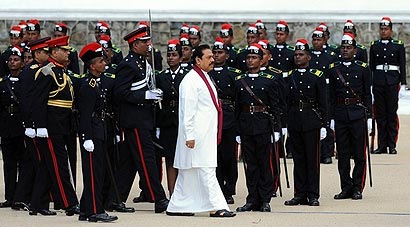 Defeated terrorist elements have encamped in several foreign nations and their latest weapon is to defame our country and throw allegations at our war heroes accusing them of war crimes, stated President Mahinda Rajapaksa.

‘We have already commenced the battle against them in the international sphere and are committed to continue it’. President Rajapaksa said so at the ceremonial passing out parade of Cadet officers at the Sri Lanka Military Academy (SLMA) in Diyatalawa

‘You pass out today to contribute to this noble humanitarian operation’, the President told the Cadet officers.

A person does not excel through talent and knowledge alone. Instead, the most important element is the love for one’s country, he pointed out.

‘The government not only lined up the security forces for the humanitarian operation but also organized the people against terrorism.

The government received tremendous support from the people in eliminating terrorism’, he said.

‘The highest tribute to these people is to ensure that terrorism does not raise its ugly head’, he emphasized.