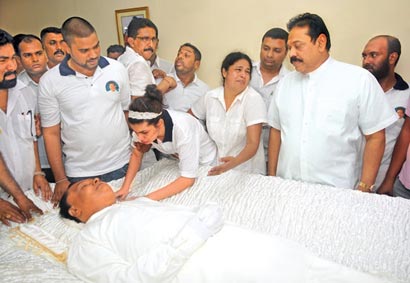 The ruling party in Sri Lanka should take the responsibility for the recent murder of a presidential advisor, his family members say.

In an exclusive interview with BBC Sandeshaya, Swarna Guanaratne, elder sister of slain Bharatha Lakshman Premachandra said that the family is not satisfied about the progress in the murder investigation.

The Sri Lanka Freedom Party (SLFP) has failed to even send a reply to an appeal sent by the family in February this year seeking more security to her brother, she said.

“So I accuse the SLFP of being responsible the murder of my brother,” she said, adding that the family does not believe that the police investigation into the murder is impartial.

When journalists in Colombo asked Minister Keheliya Rambukwella on the letter written by the Premachandra family, the miniser said the late politician was provided with adequate security.

“We were not simply asking security; we were asking the government to raise two security guards to six,” was the response by Mr Premachandra’s sister.

“But when I asked my brother after sending the letter, he said Duminda’s security has been increased to 14, instead.”

Saman Shantha Perera, an eye witness driver has testified to the police that it was Duminda Silva who first shot at Mr Premachandra after beating him.

Mr Silva then ordered his men to shoot Mr Premachandra, the driver of the slain politician has told police investigators.

Driver Perera’s statement was produced before the Colombo magistrate’s court by the police on Thursday.

But defence spokesman Lakshman Hulugalle earlier told BBC Sandeshaya that the young MP is not a suspect in the murder investigation.

MP Silva, who was also shot at, is still being treated in the intensive care unit in the hospital following a brain surgery.

A supporter of Mr Premachandra has been taken into custody on suspicion.

Swarna Guanaratne blamed the government of not informing the family members of the slain politician on the progress of any investigation.

“President did not even speak to us at least to express his condolences. And none of the ministers spoke to us, the family, regarding my brother’s death,” she told BBC Sinhala.

Duminda Silva was appointed as the monitoring MP for the defence ministry.

“We understand that senior officials at the defence ministry have been supporting Duminda Silva otherwise how could he get that many weapons? And why did he go there with that many weapons if not for the killing?” Mrs Guanaratne questioned.

“This was a pre-planned murder.”