BJP in Sri Lanka: India distances itself from Tamil Nadu-TNA-LTTE and Eelam 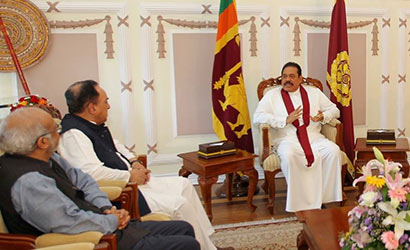 The topic was ‘India under Modi: Relevance for the Region and the World’, organized by the Bandaranaike Centre for International Studies and held at the BMICH moderated by former foreign secretary HMGS Palihakkara. Introducing the panelists was Mr. Sunimal Fernando, Advisor to H.E. the President of Sri Lanka and Chairman/Board of Studies of the BCIS. Prof. Madhav Das Nalapath of Manipal University, Dr. Suresh Prabhu was a former Union Minister under the Vajpayee Government and a member of the Shiv Sena, Dr. Swapan Dasgupta was introduced as a senior journalist and political commentator, Dr. Seshadri Chari was from the RSS and National Convenor of the Foreign Policy cell of the BJP. Dr. Subramaniam Swamy (Former Union Cabinet Minister & Chairman of BJP Committee for Strategic Action) did not require any introduction and Mr. Sunimal Fernando summed up his popularity by saying that if Dr. Swamy was to contest an election in Sri Lanka he would win with a resounding victory.

Dr. Swapan Dasgupta commenced the discussion by drawing attention to a startling resemblance that the audience in Sri Lanka could relate to. This parallel was the manner that the English speaking elite of India was unanimous in their view that Modi had to be stopped. It was the ‘elite’ factor on both sides that continue to play a role against the leaders of the two nations.

Dr. Swapan also showed that it was the age group between 18-25years that voted for Modi on a belief that change would happen. The change factor the audience was told was directed more at an economic revival in India rather than foreign factors.

Concerns of Indians and Modi were more directed towards generating employment, dealing with corruption, upgrading infrastructure, removing foreign investor fears and Dr. Swapan asked that Modi not be looked as a Milosevic DNA. Dr. Sheshadri echoed similar sentiments that investors had been backing off in view of the poor opinion on India and it was only Chennai and Gujarat that made a difference.

Modi’s characteristic departure from conventional governance is what appealed to the people and why he eventually became the choice of the people. Dr. Sheshadari cited the invitation to SAARC leaders to attending the swearing in as an example of the unconventional stand of Modi. He also recalled how Sri Lanka entered international records by electing the first woman Prime Minister (Sirimavo Bandaranaike).

The logic of prosperity was also highlighted as being mutual and this thought was mooted with another welcome suggestion to consider building a collective commonwealth of Asian nations.

The reference to Sinhalativu by an Indian poet Bharatiyar in 1905 was welcomed by those continuously claiming that Sri Lanka was a Sinhale Nation.

Dr. Subramaniam’s speech covered the personality aspect of Modi and reminded the audience the unique difference in India selecting as Premier a person belonging to the backward caste unlike all his predecessors. He cited how inspite of 14 of the 15 councils voting for Sarda Patel, Mahatma Gandhis’ choice was Nehru.

Prof. Nalapath reiterated Modi mantra as being Minimum Government and Maximum Governance, a lesson Sri Lanka needs to take a leaf from.

Prof. Nalapat urged Sri Lanka to encourage English learning and build upon the entrepreneur skills of Jaffna while also reminding the power of Buddhism and its soft power reach. He also predicted a golden period in Indo-Lanka relations,

Dr. Suresh Prabhu the last speaker proudly reminded the audience that Modi was the 1st Prime Minister chosen by the people.

India under BJP was articulated by the BJP leaders:

Dr. Subramaniam’s eloquence in pointing out the achievement of the Sri Lankan forces being the only country in the world to successfully eliminate such a dangerous terrorist organization completely was nothing that the members of the TNA present would have liked to hear.

The TNA leaders present (Sambanthan and Abraham Sumanthiran) would not have been pleased to hear Dr. Swamy’s reference to the ongoing supreme court case wherein an affidavit has been sought from the ITAK to assure it is not aligned to a separatist agenda.

Dr. Swamy also pointed out that there was no genocide in Sri Lanka and only the Tamils living in UK and elsewhere were claiming there was genocide.

The fishermen issue also was cleared and appreciation was shown to fishermen being released but confiscating the trawlers.

Dr. Subramaniam Swamy’s statement ‘targeting of Sri Lanka over human rights issues has gone too far and has to stop’ was no music to the TNA members present either. The music got worse when Dr. Swamy went on to say that India would give Sri Lanka ‘more support than ever before’.

The floor was open for questions and replying Dr. Nalapat declared that Modi’s logic was simply ‘If you are good to me, I will be good to you… if you are not… I am not obliged to be good to you’. It was advice well worth remembering.

Attorney Senaka Weeratne posed a question on how keen India was to protect territories outside of India where Indian civilizational influence prevails on account of aggressive Abrahamic incursions and Buddhist and Hindu space shrinking as a result and battling to survive. He drew upon how India was looked up to highlighting that neither Buddhists nor Hindus had external funds to defend or protect their space. The need for Buddhists and Hindus to build a block comparable to that of the OIC and EU was suggested. The panel welcomed the suggestion but chose not to elaborate but assured that the Prime Minister’s attention would be drawn to it.

The promise of good days to come under Modi.

Sri Lanka, in particular the audience present were happy to hear of India’s stand vis a vis the Tamil factor for it would silence the TNA in more ways than one. At the same time the stand on 13th amendment unless it was simply to show an open difference, is an area that India must realize the implications in view of plans to break up India.

The other stands taken by India on the UNHRC and Resolutions is a relief for it reminds India that the stand India should take is in India’s own interest and not because of Sri Lanka.

Home » BJP in Sri Lanka: India distances itself from Tamil Nadu-TNA-LTTE and Eelam