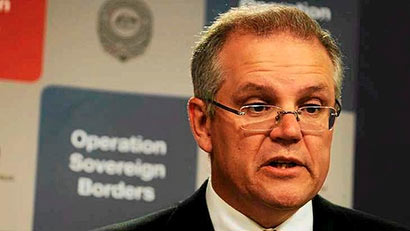 Co-operation between Sri Lanka and Australia on fighting people-smuggling has reversed migration patterns, with thousands more Sri Lankans arriving as skilled workers while the flow of illegal boats from the South Asian nation, which peaked at tens of thousands, has now stopped.

The number of Sri Lankans who became Australian citizens jumped 74 per cent to 3456 last year, while there were 4987 Sri Lankans who came to Australia legally with visas for work and for family reunions.

Immigration Minister Scott Morrison said yesterday the rising trends of legal migration were “a guide to what you would continue to expect” as he guaranteed 4000 humanitarian places would be available for people in refugee camps around the world, with high demand from Africa and the Middle East. “The suggestion that the only way you could get to Australia is on a leaky boat is not true,’’ Mr Morrison said after addressing a Sri Lanka-Australia security conference on transnational crime in Canberra.

“If people have a legitimate reason for coming then they can.’’

Mr Morrison said the last illegal boat carrying Sri Lankans was months ago and all 79 on board were sent back to Sri Lanka. The Immigration Minister said stopping the arrival of illegal boats during the past four months had allowed the government to increase the number of places for humanitarian migration from 500 under Labor to 4000 a year.

Responding to the disclosure in The Australian yesterdaythat, on the eve of her move to topple Kevin Rudd as prime minister in 2010, Julia Gillard thought the “loss of control of the borders” was the biggest problem Labor faced, Mr Morrison said it was more than four months since the last successful illegal boat arrival on December 19. “(It) didn’t matter if it was Kevin Rudd or Julia Gillard or any of the four immigration ministers that they had, they just had no answers,” he said.

“Now, in just over six months, we have ensured that we are stopping the boats and we are being true to our promises, we are doing exactly what we said we would do and it is having exactly the effect we said it would have.”

Co-operation with Sri Lanka was one of a series of policies that have helped the Abbott government “stop the boats” including turning boats back to Indonesian waters, offshore processing in PNG, temporary visas and the moves by Indonesia and Malaysia to stop entry to their countries without visas.

UN High Commissioner for Refugees figures released last week showed that between late December and the end of last month, the number of asylum-seekers registering had fallen from 100 people daily to about 100 people weekly.

“We must apply the same focus and co-operation that we have achieved on people-smuggling to the broader challenge of transnational crime,” Mr Morrison told representatives of Defence, army, navy and customs of Australia and Sri Lanka yesterday.

Mr Morrison said Sri Lanka and Australia were working together to disrupt people-smuggling syndicates, “to deliver strong messages that Australia will not resettle anyone who arrives illegally by boat, and to improve capacity to address people-smuggling and improve border management”.

“We are very grateful for the enormous efforts of the Sri Lanka Navy, the Sri Lanka Police Force and other law enforcement and prosecuting agencies.”

Mr Morrison later told The Australian: “Our more recent experience over the issue of people-smuggling, which has been very deep and very close, has opened the door to the broader opportunities of the relationship. Significant numbers of Sri Lankans are becoming Australian citizens.”