Is there an illegal settlement and mosque inside Wilpattu National Park? 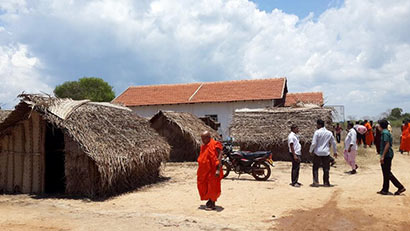 The question is simple and direct. The problem is, no one is giving a correct answer. Scores of articles, press conferences, statements have been issued none of which have given the public the confidence that they are being told the truth. The importance of Wilpattu is far more than its historical, archeological or environmental value. Wilpattu is a strategic security value center for Sri Lanka and it is on this ground that authorities should realize they need to get their act together.

Its name derives from its meaning land of lakes. It has 60 lakes and tanks spread across 131, 693 hectares in the Northwest coast lowland dry zone. In 1905 the area was designated a sanctuary and in 1938 it was upgraded to the National Park status.’ 31 species of mammals have been identified within Wilpattu national park.

The media has highlighted Wilpattu National Park with varying versions to the story. Let us first look at some of the articles and thereafter pose some questions. The contents of the arguments made by BBS certainly deserves attention.

The article claims that Rishard Bathiudeen says that

In the meanwhile there are the general mischief makers attempting to divert the core issue and utilize the opportunity to slander. When calls are made to ‘all Sri Lankans to tear up the national flag & dump it’ and Sinhalese Buddhists are being called all sorts of names throughout print and online publications, the Minister of National Language and Social Integration (who has hardly any vote base) sees only one side of the coin and has consistently shown bias. While former {residential advisors uses the opportunity to take one-sided pot shots referring to ‘Sinhala Eelam’, “Eelam Chinthanya” trying all avenues to spread the sponsored concept of interfaith in an obvious bid to curtail and clip the Buddhist identity of Sri Lanka. When Cameron can declare that England with hardly 55% Christians is a Christian state, why shouldn’t Sri Lanka with close to 70% Buddhists refer to Sri Lanka as Buddhist when every area has a Sinhala Buddhist link to its civilizational history?

Questions the public demand answers to:

We are left with more questions and NO answers.

The statements and points from articles shown above clearly establish that there is a grievance, there are irregularities and we have to also admit that Government silence or public official involvement to aggravate the situation has led to the current impasse. These are good lessons for Sri Lanka’s politicians who do not seem to think beyond their term of office and ignore the dangers lurking in our midst where foreign elements continue to attempt to fan fires of any kind. It is unfortunate that the Government and public officials are not dousing the flames but adding to the fire and this is why people take the law into their hands.

Politicians should not interfere but allow law enforcements and the country’s laws to prevail. It is when politicians involve themselves into areas that are best left for authorities to handle that trouble takes place and there are enough of elements to make the situation worse.

7 Responses to Is there an illegal settlement and mosque inside Wilpattu National Park?

Home » Is there an illegal settlement and mosque inside Wilpattu National Park?