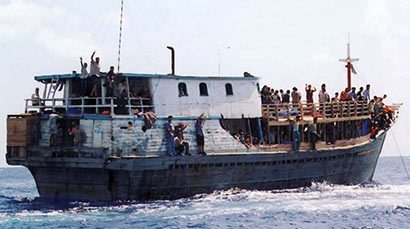 A boat with 153 refugees from Sri Lanka on board is in trouble 250 km from Christmas Island, it was reported on Saturday.

Passengers have spoken to reporters in Australia, saying the boat left from India two weeks ago and contains 32 women and 37 children and they are mostly Tamils from Sri Lanka.

“We are refugees. We come from Sri Lanka, we stayed in India and we are unable to live there. That’s why we are coming to Australia,” a man calling himself Duke told the Australian Broadcasting Corporation.

The man said the vessel was leaking and struggling in high seas and strong winds, and requested assistance.

The Australian government has vowed to stop boats carrying asylum seekers from reaching its territory, which includes Christmas Island in the Indian Ocean.

Several boats have been towed back to Indonesia in the past six months, but it was not clear whether this boat could be towed to Indonesia because it did not originate there.

Immigration Minister Scott Morrison refused to comment on the latest boat but said there was nothing to indicate an extreme risk of life at sea.

Prime Minister Tony Abbott told reporters on Saturday that the government would act in accordance with its existing policy.

People who arrive by boat without visas are taken to detention centres on Nauru and Papua New Guinea’s Manus Island. No boat carrying refugees has reached Australia since December 19, 2013. – The Hindu