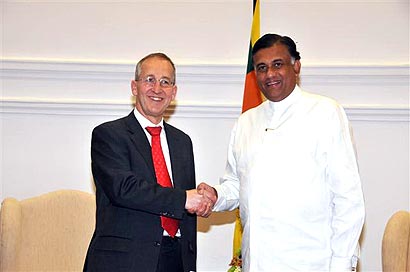 Foreign Minister Rohitha Bogollagama with Sir Peter Ricketts, the Permanent Under Secretary of the British Foreign and Commonwealth Office

Foreign Minister Rohitha Bogollagama indicated that Sri Lanka encourages the international community, including the UK, to channel development assistance through the Sri Lanka Government at this decisive phase in the country’s development process following the end of the conflict.

The Foreign Minister made these observations during his meeting with Sir Peter Ricketts, the Permanent Under Secretary of the British Foreign and Commonwealth Office at the Ministry on Wednesday.

He further noted that international agencies. INGOs and NGOs should be subject to a process of accountability in their disbursement of funds, and the projects carried out by these agencies should be in conformity with the genuine needs of the Sri Lankan people.

Minister Bogollagama also informed the visiting Permanent Under Secretary that Sri Lanka looks forward to continuing its constructive engagement with the UK given the historic relations between the two countries. Expressing his appreciation of the development assistance extended by the UK, the Foreign Minister urged the UK Government to support the initiatives being undertaken by the Sri Lanka government with regard to livelihoods development of the people in the North and the East, especially in the agriculture and fisheries sectors.

He reiterated to the visiting Permanent Under-Secretary that the Sri Lanka Government continues to be concerned by the negative perception created following the close association of the British Prime Minister Gordon Brown and Foreign Secretary David Miliband with the Global Tamil Forum, an established front organization of the LTTE with a separatist agenda inimical to Sri Lanka’s national interest.

The Minister recalled the conclusions of the GTF meeting in London, that included among others, the LTTE’s call for a worldwide boycott of Sri Lankan products, a move initiated by the LTTE. The Minister also expressed his concern about LTTE proxy organizations such as the GTF being allowed to freely conduct their activities on British soil, despite the LTTE being proscribed in the UK since 2001.

The Foreign Minister welcomed the proposal by Permanent Under-Secretary Ricketts that Sri Lanka should now focus on a process of reconciliation/healing amongst all communities, with the onset of peace. The Minister acknowledged the usefulness of such a process and noted that the best means of promoting peace and reconciliation amongst all communities is through the encouragement of the international community and the Sri Lankan diaspora to support the developmental efforts of the Sri Lanka Government to rebuild the country. The Foreign Minister also briefed the visiting Permanent Under-Secretary on progress achieved in resettlement and reconstruction.

The visiting Permanent Under-Secretary was also hosted to a lunch by his Sri Lankan counterpart, Foreign Secretary C.R. Jayasinghe. Issues of mutual interest including bilateral trade, investment, development cooperation and tourism promotion, were discussed during the lunch. Also present at the lunch from the Sri Lanka side were Secretary/Education, Secretary/Tourism, Deputy Secretary to the Treasury and Addl. Secretary/Foreign Affairs. Sir Peter was accompanied by the acting High Commissioner of the UK to Sri Lanka and other officials of the UK Foreign Office.