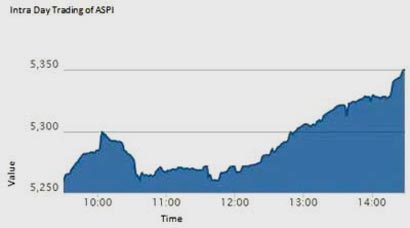 The stock market is enjoying a sudden boom but it is certainly too unpredictable to be emphatic that the rebound is there to stay though investor sentiments are sure to have got a big boost of late.

Continuing from where it left on first day of the fresh week, the Colombo stock market yesterday got further strengthened with buying across the board as confirmed by at least two brokers whilst retailers remained re-energised, which is welcome.

During the past six market days, the combined volume of shares traded was nearly 478 million, which is almost close to the entire month of July’s (21 market days) figure of 488 million. Yesterday’s number of trades was almost half of last week’s figure. Profit taking by previously battered retailers was evident which also led to some degree of volatility in indices but analysts were heartened by the fact that most are re-investing gains back in the market. The reason being that sellers finding stock prices remaining on the up on demand thereby tempting a fresh round of buying. Blue chips have fetching a higher premium on the back of investors re-rating the market.

Analysts said after being in the doldrums for many months the market ‘coming to life’, was understandable though a closer scrutiny by regulators on exposure positions was warranted as well.

There has been consensus that rebound in sentiments was owing to expectations of a more market-friendly and pragmatic regulatory regime in the SEC.
Foreigners who were net sellers on Monday were back to being net buyers of Rs. 69 million keeping the net year to date inflow at a record Rs. 28.6 billion.

“The indices continued a six day uptrend, ending sharply higher on the back of continued buying interest across the board,” John Keells Stock Brokers said. Endorsing the latter view, SC Securities said, “The buoyant sentiment of the Colombo bourse persisted for second day running with all round investor participation seeing a sizeable rise.”

“The market gaining points substantially seems to be an evidence of local investors regaining confidence, which is one of the key factors for the sustainability of the Sri Lankan equity market,” it added.

Softlogic Stockbrokers said the bull run has now persisted for nearly nine straight trading sessions leading the broader index to advance as much as 380 points (around.7.7%). “With a considerable percentage of gains have been attributed to the penny play, the quality stocks also have built momentum at a slow, steady and quiet pace,” it added.

Given retail dominance, top contributors to turnover was Free Lanka Capital (Rs. 80 million) with over 27 million shares traded and the counter closing up 28% to Rs. 2.85 whilst renewed interest on E – Channelling following a strategic buy of 10% on Monday by Capital Trust Holdings, saw it account for Rs. 64 million.

Nation Lanka Finance, Peoples Leasing and Bukit Darah too contributed to the turnover.