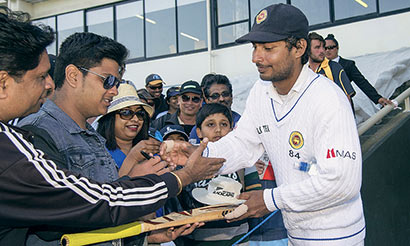 WELLINGTON: Sri Lankan great Kumar Sangakkara is reconsidering retirement plans after his 203 against New Zealand here on Sunday put him one behind Australian legend Don Bradman for the most double centuries.

The 37-year-old had indicated the second Test in Wellington could be his last with the intention of retiring from all international cricket after the World Cup which starts next month.

But after a match-changing innings of 203 to lead Sri Lanka out of trouble and put them in control of the Test at the Basin Reserve, Sangakkara said the lure of overtaking Bradman meant he may extend his career.

“I would love to,” he said, reflecting on the impact his seven-hour innings had on a match where he engineered Sri Lanka’s recovery from 78 for five to 356 all out and a first-innings lead of 135.

“It just depends on how everything pans out after this World Cup. It’s really hard to predict what will happen and what my thoughts will be at the end of the World Cup about my future.

“I’ve had a chat with the [Sri Lanka] selectors and promised them I will really have a chat and reconsider to see whether there is a few more months of cricket in me Test-wise.”

Sangakkara, the most prolific Test batsman in the world last year with 1,493 runs, began this year by becoming the fifth player, and the fastest, to reach 12,000 Test runs.

He crossed that threshold when he reached five against New Zealand on Saturday in his 129th Test, and went on to score another 198 runs before he was the ninth wicket to fall.

Of his 200-plus innings, five have been away from home to equal the record held by Bradman, Len Hutton and Brian Lara.

He is now fourth on the list of century-makers with 38, behind India’s Sachin Tendulkar (51), South Africa’s Jacques Kallis (45) and Australia’s Ricky Ponting (41).

Among the top echelon of Test batsmen, Sangakkara’s average of 58.92 is second only to Bradman.

“The desire is always there,” Sangakkara said as he weighed up the statistics against thoughts of retirement and spending more time with family and business interests. (AFP)