Brazil down Colombia but Neymar’s Cup is over 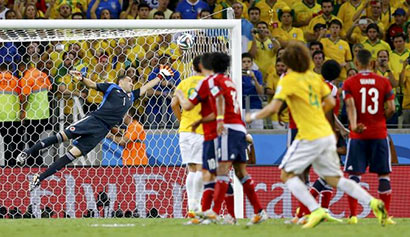 A stunning free kick from Brazil’s David Luiz sealed a 2-1 win over Colombia in a bruising World Cup quarter-final on Friday but the hosts will next face Germany without their talisman Neymar.

Brazil’s victory came at a heavy price as their leading scorer was carried off in agony with a fractured vertebra late in the game and he will not play again in this World Cup.

“It’s not serious in the sense that it doesn’t need surgery, but he’ll need to immobilize it to recover, Brazilian team doctor Rodrigo Lasmar told a local television channel.

“Unfortunately, he’s not going to be able to play (against Germany),” he said, adding that he expected the recovery period to take weeks.

Brazil will also be without their captain Thiago Silva for Tuesday’s semi-final in Belo Horizonte. He was booked for an unnecessary challenge on the Colombian goalkeeper and will be suspended.

“I am emotional because I give the team my heart and soul,” he said in a televised interview. “I am out the next game but Dante and Henrique can play well and fill my absence.”

Brazil’s victory took them into the last four of the World Cup for the first time since 2002 and the 11th time overall as they bid for a sixth world title. Their clash against the Germans is a repeat of the final in 2002 which Brazil won 2-0.

“It will be a big game – a classic in world terms, and it will be very hard,” Luiz said.

Colombia’s defeat ended their spirited World Cup campaign and meant their midfield sensation James Rodriguez ended the tournament on six goals, the highest tally so far. He left the pitch in tears after being comforted by Luiz.

After their labored win over Chile in the second round, Brazil needed a convincing performance in Fortaleza’s Castelao arena and made a perfect start, scoring after seven minutes.

Neymar swung in a corner from the left and Silva took advantage of shocking Colombian marking to bundle the ball in at the far post.

That settled nerves and the Brazilians took control. Neymar was a constant threat on the left while the powerful running of Hulk kept the Colombian defense on the back foot.

But despite their dominance Brazil had to wait until the 69th minute to double their lead.

Rodriguez fouled Hulk and Luiz fired home a 30-metre free kick worthy of the great Brazilian deadball specialists of the past like Rivelino and Zico.

Colombia had a Mario Yepes effort ruled out for offside before Rodriguez dragged his side back into the match from the penalty spot with just over 10 minutes remaining.

Julio Cesar brought down Carlos Bacca as the Colombian striker headed goalwards and the Brazilian keeper was fortunate not to be sent off for a foul on the last man.

The Colombian goal made for an uncomfortable finale for the Brazilians but they held on, maintaining their remarkable record of never having lost a competitive home match since 1975.

Colombia have now failed to beat Brazil in their last 13 attempts in a run dating back to 1991.

“We’re very sad because the dream is over,” coach Jose Pekerman said.

“The team left their mark on this tournament. We’ve created a very good image and Colombia should be proud.”

Home » Brazil down Colombia but Neymar’s Cup is over