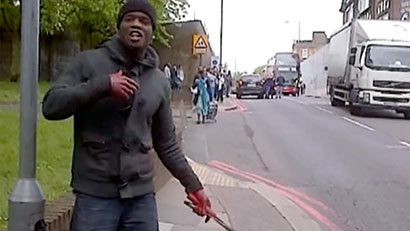 The cold blooded killing of an Englishman in British army uniform in broad day light in Woolwich, London by two black men a few days ago was a heinous crime that shocked the public in both England and overseas, but it has nevertheless opened a Pandora’s box related to accountability for crimes committed by people in British army uniform on black and Muslim people in Africa and Middle East over a considerable length of time, and the role of the criminal justice system in Britain, British colonies and the international criminal court in failing to bring to book perpetrators of such crimes in British Army uniform.

Is righteous indignation an admissible defense in a criminal court?

The purpose of this article is not about arguing whether it was morally right and legally permissible to avenge a killing by another killing but for the world to realize that we are now stepping into a very volatile future because of the double standards that are taking root in the international legal system ever since colonial expansionism in the world led to racism, unlawful demarcation of territory of native lands, planned and systematic plunder of lands, destruction of native environments, divisions and dissent created in a policy called “divide and rule”, transporting natives and colonizing them in different parts of the world, the scores of murder, inhumane treatment, massacres by foreign men in uniform upon natives who were merely trying to protect their ancestral lands, and lack of investigation of such conduct and lack of commitment on the part of the international community to raise accountability issues concerning these massive crimes against humanity.

Drummer Rigby was an unfortunate death because he was in uniform. Elsewhere men in uniform have blood on their hands for scores of civilian deaths. The world may like to recall series of civilian killings – 1999 Bombing of Aleksinac, Grdelica train bombing, targeting civilians walking in a column, NATO cluster bomb on a hospital in Serbia by NATO, the countless bombing raids on Iraq, the unlawful Atom Bombs used in the Nagasaki and Hiroshima bombing that killed 140,000 civilians are just a handful of notorious crimes against humanity that have been committed and the perpetrators continue to remain unindicted and without expression of any remorse.

A key word is “remorse” because there is no remorse by these same perpetrators whether it was during colonial times or post-colonial the manner in which they selfishly target Third World nations on concocted charges or by creating false flag events to facilitate their invasion and intervention and then engage in the same acts of crimes that are allegedly being committed by the people in the home (invaded) country.

The natives in Africa and other parts of the world during colonial times did not have proper arms or ammunition to fight back – they were forced to sacrifice their lives in an unequal armed contest. The memory of such lop sided armed conflict in the past leading to oppression of third world people by the whites is now driving people like Michael Adebolajo and Michael Michael Adebowale to take the law unto their own hands as we see another similar copy cat incident of an uniformed soldier in Paris being stabbed. France was a major colonial power in Africa.

It would not be possible to accept the West claiming victim status because it is their planned and staged atrocities that are bringing calamities thereby contributing to the killing of innocents. Today people are well read and in spite of them being bombarded with a barrage of distorted news and twisted commentary favouring the stand of western countries by the pro-Western media both locally and internationally and have got their citizens mesmerized into believing all that their governments do and say is correct there is a large and increasing gathering of observant and independent people that are now uniting on the side of righteousness to say “enough is enough” – the playing field must be made level.

Michael Adebolajo may well be a descendant of one of the generations of Nigerians who were originally enslaved and then taken all over the world and forced to work on British plantations as black slaves. If these past crimes have been pushed into the background in an unprecedented move to make up for the crimes done by helping these now poor Third World nations to rise up from what their nations became – but it is the exact opposite of what should be happening that is now making people stand up and be counted.

The murder of Drummer Rigby is something far more than the present euphoria associated with anti-Muslim sentiment. What we need to extract from the murder is the fact that no longer can we continue to have a biased world wherein killing of a white becomes defined as “terrorism” while whites commit killings on civilians elsewhere round the world wholesale and with impunity. It happened during colonial times and it is still happening now in a world that is supposed to be civilized and doing civilized things under the umbrella of terminologies that supposedly promotes human rights, transparency, democracy and the very tenacious term now being thrown freely called “reconciliation”.

We are likely to see more “eye for an eye” avenging type incidents if the West does not come down from its high pedestal of bullying and arm twisting third world people. But so long as there are people like Gen. James Cartwright and Sen. Lindsey Graham who believe that the US has the right to kill its “enemies” even when they are “asleep”, there is likely to be more tension. Not many in the US or UK were shocked and aggrieved when scores of Iraqi civilians ended up victims of US sanctions, children died due to lack of food and as long as there are people like Madeleine Albright who says “it was worth it” the hatred that the West is daily generating will not fade. We at times wonder whether the hate is actually intentional –Michael Adebolajo was approached by MI5 to do a “job” on their behalf. We now question what exactly that job was meant to be.

Africa was divided into 50 nations in 1884-85 at the Berlin Conference. The Berlin Conference regulated European colonization and trade in Africa during the New Imperialism period, and its outcome, the General Act of the Berlin Conference, can be seen as the formalization of the Scramble for Africa. The conference ushered in a period of heightened colonial activity by European powers, while simultaneously eliminating most existing forms of African autonomy and self-governance.

Africa is in a state of ruin and relative poverty because of what the West did and what the West is continuing to do. But there are magnanimous gestures – Brazil has written off US$ 900m of African debt.

We do not justify the killing of Drummer Rigby – he was a soldier killed by a civilian. Elsewhere through colonial history hundreds of thousands of soldiers have killed innocent civilians during colonial rule and it continues to happen even in the present. Not a single British soldier who committed crimes during colonial rule was ever put on the dock, convicted and punished like what happened to Nazi war criminals at Nuremberg, and even now the scale of justice for crimes that Anglo – American troops in Afghanistan, Iraq, and Okinawa commit never get the same level of accusations that non-Whites get. This is a perversion of justice. It is also tantamount to racism and cover – up of crimes committed. Such conduct is no longer acceptable to the unfolding new world order that is emerging under Asian stewardship.