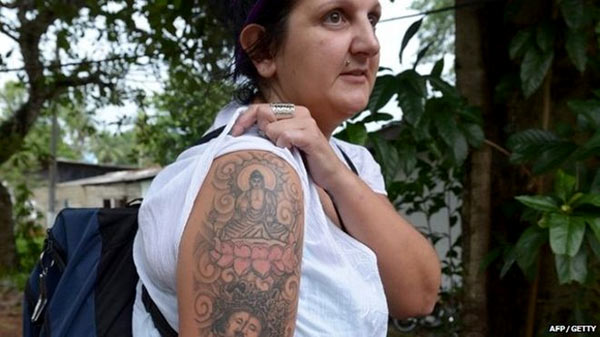 A British woman won 800,000 rupees ($5,200) in compensation from a Sri Lankan court on Wednesday after being wrongly deported for having a Buddha tattoo on her arm.

Buddhism is accorded the “foremost place” in Sri Lanka’s constitution and about 70 percent of the island’s 21 million people are Buddhist. But there is no law banning Buddha tattoos.

The Supreme Court also ordered police involved in the 2014 arrest and detention of Naomi Coleman to pay her 50,000 rupees ($325) each, the government’s information department said on in its website (www.news.lk).

Coleman was deported “contrary to the law governing immigration and emigration”, the government said.

Coleman was not present in court.

A lower court had decided to deport Coleman partly because she could have been “vulnerable” if allowed to stay as some Sri Lankans could have been offended by the tattoo, officials said.

In 2013, Sri Lanka, a former British colony, denied entry to a British man because of his Buddha tattoo.