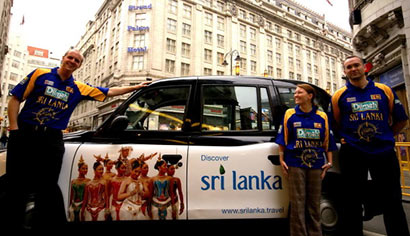 The Sri Lanka Tourism Promotion Bureau (SLTPB) under the guidance of the Economic Development Ministry launched an International Tourism Promotional campaign to increase awareness of destination Sri Lanka around the world. As part of this campaign, 1,200 taxis will be branded featuring key tourism attractions of Sri Lanka in major destinations around the world including UK, France, Germany, Korea and Japan.

Accordingly, Sri Lanka Tourism has branded and launched 450 taxis in three of the UK’s biggest cities: Manchester, Birmingham and London recently. The first fleet of 300 taxis of this campaign were launched on August 4 in London. “Sri Lanka – A Journey Awaits” tagline will promote the key tourism attractions of Sri Lanka on taxis with a massive fleet of cabs in each city displaying Taxi Super sides, back seat covers, Taxi receipts with stunning visual imagery of Sri Lanka’s prominent tourism attractions.

The campaign will run for 12 weeks in the UK.

The campaign will blend seamlessly onto each city’s taxi cabs, using clear branding to promote Sri Lanka as The Gateway to Asia.

An ideal way to promote a business or project a message to a target city, taxi advertising offers a high-impact approach to effective marketing.

Reinforcing the campaign with interior advertising ensures reach to an even wider demographic by targeting passengers as well as pedestrians and fellow road users.

SLTPB officials ensured that the use of taxi advertising is a powerful tool for Sri Lanka Tourism Promotion Bureau to drive brand awareness and help project the country as a beautiful tourist destination across the UK’s three major cities. As an outdoor advertising format, advertising on taxis allows huge reach to valuable audiences who will be drawn in by this attractive campaign. The UK campaign will create a huge impact with the three chosen locations offering the biggest and wealthiest audiences in the UK.