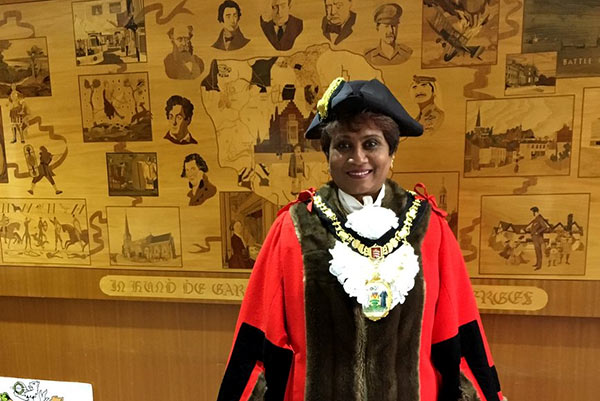 Campaigners have called on the Mayor of Harrow to resign after she was pictured with senior military figures during a visit to Sri Lanka.

She posted pictures of her meetings – in which she is wearing the mayoral chain – on social media alongside messages praising the soldiers for their service.

But members of the Tamil community in Harrow are upset at this representation, given the army officials’ involvement in the Sri Lankan civil war.

They were particularly disappointed given that Brig. Fernando was found guilty of violating the Public Order Act when he made a throat cutting gesture at protestors – many of whom were Tamil – outside the Sri Lankan High Commission in London.

A petition with 49 signatures was handed to Harrow Council calling on Cllr Marikar to step down from her role.

It said: “Most Tamil residents in Harrow escaped the war and came to the UK as refugees, and they still carry the scars of that war which killed many of their kith and kin in their former home country.

“We believe Ms Marikar’s judgement on this matter was very poor and her actions were offensive to the Tamil community she represents in Harrow.

“It was extremely upsetting to learn that Ms Marikar, who represents a large number of Tamils in Harrow and claims to have a detailed knowledge of Sri Lanka, chose to publish photographs with these senior military officials.”

The Sri Lankan Civil War, which stemmed from ambitions by the ‘Tamil Tigers’ to form an independent state, ravaged the country for more than 25 years – finally ending in 2009.

Cllr Marikar, who was elected as mayor in May, hails from Sri Lanka herself. She has lived in Harrow in Greater London, England for 28 years and has served as a councillor since 2010.