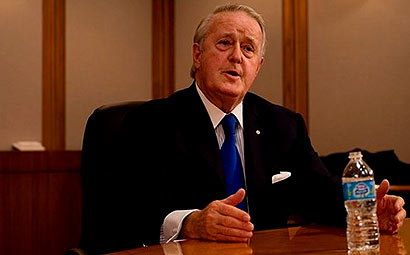 “If you were going to boycott the Commonwealth because of illustrations of improper government or abusive treatment of people within some of the member countries, some days you wouldn’t have too many people around that Commonwealth table for tea,” Mulroney said during an appearance on CTV’s Question Period.

“There’s a lot of developing countries in there, countries with problems, and the best thing I think that we can do is be there at the table and illustrate, by our presence, the value of what we’ve learned as a country over 146 years and how we conduct ourselves with our democracy and with our generosity to friends internationally.”

Mulroney said the 53-nation Commonwealth is a powerful group and Canada should work within it to make a statement. For example, Mulroney pointed to the accomplishments of  prime minister John Diefenbaker who, at the 1961 Commonwealth leaders’ meeting, denounced South Africa’s apartheid policy and joined forces with Asian and African government leaders to push through a resolution making racial equality a condition of Commonwealth membership. South Africa subsequently withdrew from the Commonwealth and was not re-admitted until its apartheid regime ended in the 1990s.

“Working within the Commonwealth, we were able to score more heavily than by sitting outside,” Mulroney said.

Prime Minister Stephen Harper announced earlier this month that he would boycott November’s Commonwealth Heads of Government meeting in Sri Lanka because of the country’s failure to investigate war crime allegations and human rights abuses during and after its civil war, which came to a bloody end in 2009.

“Canada believes that if the Commonwealth is to remain relevant it must stand in defence of the basic principles of freedom, democracy and respect for human dignity, which are the very foundation upon which the Commonwealth was built,” Harper said in a statement. “It is clear that the Sri Lankan government has failed to uphold the Commonwealth’s core values, which are cherished by Canadians.”

He also said Canada would review its financial contributions to Commonwealth programs.

Deepak Obhrai, the parliamentary secretary to the minister of foreign affairs, will attend the meetings in Harper’s absence, Montreal Gazette reports.

3 Responses to Canada should not boycott CHOGM – Fmr. Canadian PM