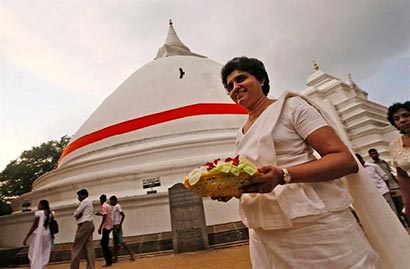 Protesting against the impeachment of Dr.Shirani Bandaranayaka Lawyers Rights Watch Canada said, that the international legal community has cautioned the Sri Lankan government for months that efforts to impeach the Chief Justice would be viewed as an attack on the independence of the judiciary and a derogation of the rule of law in Sri Lanka.

In a message to President Mahinda Rajapaksa the human rights group of Canadian lawyers added, “Lawyers Rights Watch Canada (LRWC) is deeply alarmed by the motion passed  by the Parliament of Sri Lanka to impeach Chief Justice Shirani Bandaranayake of the Sri Lankan Supreme Court.”

Despite strong criticism from members of the legal community in Sri Lanka and around the world, the Sri Lankan parliament ignored rulings from both the Court of Appeal and the Supreme Court in carrying out the impeachment motion. “It is our understanding that any attempt to carry out the impeachment process against the Chief Justice is illegitimate and contrary to the Sri Lankan constitution” the LRWC message further pointed out.

The message also said,LRWC joins members of the international legal community and members of the Sri Lankan bar in opposing this attack on the independence of the judiciary in Sri Lanka. In a letter addressed to the justices of the Supreme Court, a collective of Sri Lankan lawyers have requested:

The following are excerpts from the message: “The international legal community has cautioned the Sri Lankan government for months that efforts to impeach the Chief Justice would be viewed as an attack on the independence of the judiciary and a derogation of the rule of law. In a strongly worded condemnation of the impeachment motion, the International Commission of Jurists has stated,

Sri Lanka’s parliament and executive have effectively decapitated the country’s judiciary in pursuit of short term political gain. As an immediate matter, this has precipitated a legal and constitutional crisis of unprecedented dimensions; but just as worrying are the consequences of this action, which severely erodes accountability and the rule of law in a country already suffering from decades of impunity.

LRWC agrees with the statement issued by the Asian Human Rights Commission that “by passing the resolution to remove the Chief Justice of Sri Lanka, the government will usher in a period of serious repression, which they will have no capacity to control.” We urge you to listen to these statements by legal and human rights specialists in Sri Lanka and abroad.”