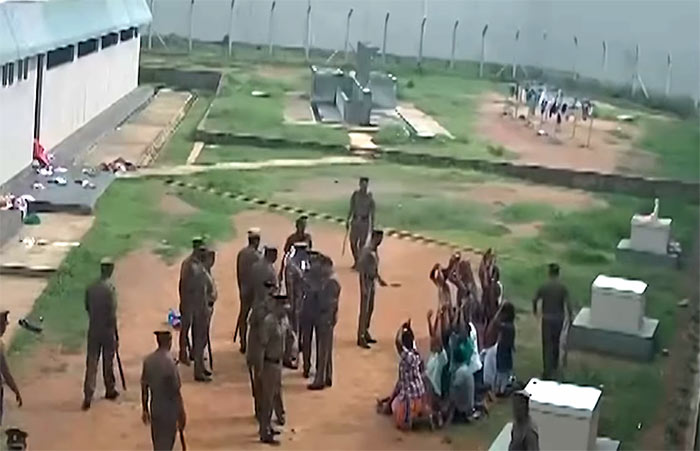 Leaked CCTV footage from the Angunukolapelessa Prison revealed that on 22 November 2018, Prison Police personnel led by the Prison Superintendent, chased unarmed and unresisting prisoners in remand custody, got them to crawl and walk on their knees, continuously attacked and assaulted them with batons and in one instance, even kicked a detainee.

The Committee for Protecting the Rights of Prisoners (CPRP) yesterday (16) lodged a complaint with the Prisons Commissioner General, the Human Rights Commission and the Justice and Prison Reforms Ministry, over the alleged assault.
Previously, on 15 January, the CPRP lodged a complaint with the Criminal Investigation Department with CCTV camera footage-based evidence of the aforementioned incidents (warning also of the likelihood of the CCTV evidence being deleted and erased).

The video taken from the newly established Prison which the Government has described as the super Prison, the most luxurious of the country’s institutionalised correctional facilities found within the rehabilitation-based penal system, shows Prison personnel (a minimum of 25 to 30) led by the Prison Superintendent, the latter dressed in civvies, chasing unarmed and unresisting (no provocation too) remand prisoners, who were only moments ago asleep and clutching their bed sheets, blankets, pillows and sarongs, into an open yard in one corner of the prison manned from outside of the high barb-wired Prison wall by a guarded watchtower. The remand prisoners are then attacked and assaulted with batons with the Prison Superintendent also dealing blows and clubbing them. The officers then get the detainees to kneel with their hands held high above their heads and to move forward on the gravelly and sandy path on their knees and to even crawl on all fours, all the while continuing to beat them on the soles of their feet, upper (necks, shoulders) and lower backs, hands, and the frontal upper torso.

The video clip with CCTV footage from two camera angles from either side of the yard depicts events which took place from 8.56 a.m. till 9.18 a.m. on the day.

The reasons for the above treatment as explained by CPRP General Secretary, Sudesh Nandimal Silva, who addressing a press conference held yesterday in Colombo, described the above-mentioned sequence of events as being part of a “conspiracy orchestrated by Prison Superintendent A.W. Siridath Dhammika” concerns a convoluted plot revolving round the protest held on 21 October 2018 by the Prison inmates against the alleged offensive nature of the search of prisoners visitors by the Police Special Task Force (claims of strip searches), an alleged financial irregularity involving the Prison canteen and the prisoners demand for Dhammika’s transfer.

“This latter protest was settled through the intervention of the Prison top brass. Dhammika who thereafter lay low, became emboldened after the 26 October 2018 political crisis. Thus, what took place on 22 November 2018 is an act of retaliation and vengeance,” Silva further claimed.

The acts depicted in the footage constitute ones that fall within the ambit of torture/cruel/inhuman/degrading treatment and/or punishment.

CPRP Chairman, Attorney-at-Law Senaka Perera also speaking at the said Media briefing, added that the Committee may based on the actions taken in this regard by the relevant authorities or the lack of actions, go to Court to have the criminal law enforced in connection with this case.

When contacted by Ceylon Today, Dhammika whilst admitting to the treatment and punishment meted out to the remand prisoners, claimed that several incidents prior to the day leading to the continued lack and loss of control of and discipline within the Prison and alleged riotous conduct on the part of two groups of remand prisoners on the day had led to such control action on their part.

“The described incident took place. We only used the officially issued batons and that too lawfully to prevent others from getting hurt. On the day, there was a major riot inside the Prison. Two groups of remand prisoners nearly beat a suspect to death with two iron poles. The iron poles were removed from a door with several prisoners pulling them off it in the presence of the officials. They aimed at the head but the blows hit the shoulder instead, breaking the said bone.

We were taking the injured prisoner to the hospital while the described incident was going on. The officers that went to the relevant ward to control the situation were not allowed to leave. We couldn’t even get them out. We could only take one pole into custody while the whereabouts of the other was withheld from us even though the entire clique of prisoners knew its hidden location.”

He further claimed that in the days leading up to the said events, convict H.E. Menaka Sanjeewa alias Ukkuwa from Hokandara was stoned to death, a heroin addict bulldozed past the Prison doctor and escaped in the presence of the Prison Officers, and another drug user attempted to jump off the Prison’s roof. “These are all connected to drugs. An internal inquiry was also conducted by us and those prisoners involved in such were produced before the relevant Magistrate.”

Meanwhile, Minister of Justice and Prison Reforms Thalatha Atukorale yesterday instructed the Prisons Commissioner General to appoint a three-member committee to provide a report regarding the incident prior to 21 January, adding that further action would be taken based on the report. Prisons Commissioner (Administration/Intelligence and Security Divisions), H.M.T.N. Upuldeniya is heading the committee.