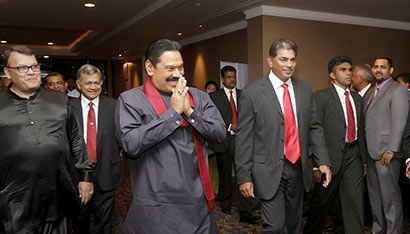 Chairman of the Tea Exporters’ Association (TEA) of Sri Lanka, Rohan Fernando presented their proposals to President Mahinda Rajapaksa to support the Government’s efforts to increase exports toward the goal of US$ 20 billion by 2020 with a tea contribution of US$ 3 to 5 billion by that time. He also tabled the current status of the tea export industry in Sri Lanka at the 14th Annual General Meeting of the TEA which was held at the Hilton Hotel, Colombo on 15 October. The theme of the AGM was “Sri Lanka: The Tea Nation”.

President Mahinda Rajapaksa graced the occasion as the Chief Guest and Minister of Plantation Industries Mahinda Samarasinghe as the Guest of Honour. The Minister said that the country’s tea export revenue needs to reach US $ 5 billion mark by 2020 to become the top global exporter in the world. Therefore, Sri Lanka Tea Board drawn strategic plans to promote the tea market aggressively in order to regain lost markets and attract new markets.

Minister Samarasinghe also said that valued added tea is concern Sri Lanka is one of the top exporters in the region as well as the highest exporter of 46 percent of the total production. Other competitors like India only produce 11 percent and Kenya is only 4 percent of their total production. Therefore, the government aims to promote value added tea exports through various marketing strategies to promote value addition to reach the US $ 5 billion export mark in 2020.

Minister of Plantation Industries further added, Sri Lanka is anticipating US$ 1.5 billion from tea exports this year which contributes 2 percent of the country’s GDP and 65 percent of the agriculture exports. Therefore, Sri Lanka should tap major markets like China, Russia and other potential markets around the globe, which has a high demand for Ceylon tea.

Chairman TEA Rohan Fernando said that most of local tea brands are available in most respected chains of supermarkets, supermalls, hypermarkets, hotels, restaurants, bars and cafes in the world and could reach the US$ 5 billion target through promotions in new markets and capture into lost markets.

Secretary General TEA, Niraj de Mel said their AGM will showcase the value addition brought in by the tea export sector of the country which amounts to approx US$500 million of the total annual foreign exchange earnings of US$1.412 billion in 2012. It will also serve to apprise to the policy makers the huge investments that have been made by the membership in infrastructure development locally and in promoting the brand overseas, in a bid to invite all the stakeholders to support the industry to transform into the next level of growth and progress as the ‘Tea nation of the world.” In a national context, the tea export industry has played a pivotal role in growing the economy and accounts for 15% of the total export earnings in the country.

During the AGM, the official website of the TEA also launched by President Rajapaksa . Opposition Parliamentarians Harsha De Silva, Ravi Karunanayake and Arjuna Ranatunga were present at the occasion.

The Tea Exporters’ Association, the leading umbrella organisation which brings all the tea exporting companies together, plays a vital role in taking ‘Ceylon Tea’ to the international market. The TEA was established in 1991 by a group of leading tea exporters with a view to looking after the interests of one of the main stakeholders of the tea industry – the exporters. However, the association really took off in 1999 when a group of key exporters understood the tremendous potential of the tea export sector, and decided to give the stakeholders a ‘voice’ among policymakers. Since then the TEA has grown from strength to strength. Today, the Tea Exporters’ Association comprises 53 companies accounting for approximately 87% of Sri Lanka’s tea export volumes and revenue. 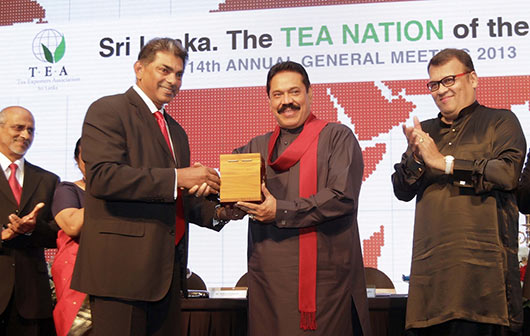