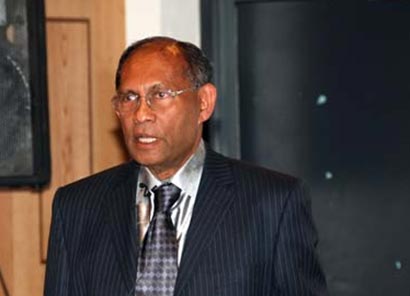 Professor Chandra Wickramasinghe of  the Buckingham Center for Astrobiology in the United Kingdom said the microbes present in the red rain water that had been collected in the Sevanagala area in Sri Lanka when seen through the optical microscope are still alive and are with tails moving  like sperm and high in arsenic and silver unlike any life form so far found  on earth.

A combination of arsenic and silver are believed to be toxic to many life forms on earth.

Wickramasinghe  described the chemical content of the coloured rain as extremely out of the ordinary and unusual and described them of having arrived here from a location abundantly high on those rare chemicals.

Wickramasinghe suggested that if one replaces phosphorous with arsenic it could lead to a whole new life form , perhaps a  in chemical content.  Phosphorous is a main ingredient in the DNA and RNA.  He said  by a cross section of the cell  under electromagnetic microscope  scientists would attempt to identify the cell’s DNA.

In an email interview he said, “at present the most unusual property of the organisms in the red/yellow rain is their ability to concentrate the chemical elements Arsenic and Silver that are rare on the Earth. Most bacteria are poisoned by silver, but some yeast is known that can concentrate this element. There are some bacteria (rare) that can metabolize arsenic, but the property of concentrating both silver and arsenic is unknown in Earth organisms. The other problem to tackle is that millions of tonnes of this material has fallen with the rain. The problem of lofting this vast quantity to the clouds by meteorological processes remains unsolved – if an earth based explanation is to be sought.
Of course we need to confirm the results obtained by Prof Samaranayake’s team about the As – Ag abundance, and this we intend to do.”

He further said, ““I think what happened is probably this: Several fragments of comets containing these cells dispersed their contents into stratospheric/tropospheric clouds at heights of 10-20km. The particles could take weeks to fall through these regions, and they could seed clouds to form water droplets that turn into rain. It appears that the red cells are alive and multiplying in the rain. The progeny of the red cells are probably the yellow cells. In the experiments done in Sheffield and Cardiff on the Kerala red rain cells a growth cycle of these cells was discovered, and yellow cells are the immature red rain cells. A similar situation could be true for the Sri Lankan red rain cells, but we need to show this. My PhD student Jamie Wallis from Cardiff and Professor Milton Wainwright from Sheffield will be working on this in collaboration with me and Dr. Anil Samaranayake at the MRI in Sri Lanka to get to the bottom of this mystery.”