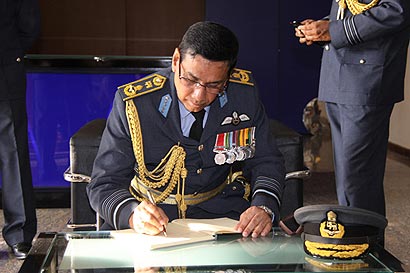 Following the handing over-taking over parade, the Chief of Defence Staff handed over the Commander’s baton to his successor, signifying the change of command. The occasion was well attended by SLAF personnel from the Board of Management, Officers and Other Ranks.

Air Chief Marshal Roshan Goonetileke’s command tenure which commenced on 11 June, 2006 will be an extremely significant epoch in the history of the Air Force for several reasons of which the successful completion of the Humanitarian Operations is the most noteworthy. As Commander of the Air Force, Air Chief Marshal Roshan Goonetileke provided leadership and guidance to the air crews and the staff of the whole organization during the war which eliminated terrorism from the face of the motherland.

The Chief of Defence Staff’s command also saw him spearhead a number of innovative projects namely, the Air Force Museum, SLAF Model Aircraft Workshop, the Garment Factory at Sigiriya and the reinstatement of Helitours. Ventures such as the Marble Beach Resort and Golf Course in China Bay, which put Air Force on par with the country’s burgeoning tourism industry were also initiated during the command of Air Chief Marshal Roshan Goonetileke.

Air Chief Marshal Goonetileke joined the Sri Lanka Air Force as an Officer Cadet in the General Duties Pilot Branch on 13 January 1978 and was commissioned in the rank of Pilot Officer on 24 August 1979.

During his illustrious career of 28 years, he has held a number of appointments in command, operational and administrative spheres. He served as the Commanding Officer of the No. 4 Helicopter Wing and subsequently took up senior operational command appointments as the Zonal Commander Northern Zone and Zonal Commander Eastern Zone. In addition he has also commanded Air Force Bases in Katunayake, Anuradhapura and China Bay. Following a very successful tenure as Director of Operation of the Air Force, he was appointed as Chief of Staff prior to being appointed as the 12th Commander of the Sri Lanka Air Force.

Leading the Air Force into its much anticipated 60th anniversary as its 13th Commander is Air Vice Marshal Harsha Abeywickrama who will officially begin duties commencing tomorrow morning, after being promoted as Air Marshal.

AVM Abeywickrama was enlisted to the Sri Lanka Air Force as an Officer Cadet in the General Duties Pilot branch on 19 April, 1980. On successful completion of training, he was commissioned in the rank of Pilot Officer on 3 April, 1982. During his illustrious career spanning three decades, he held instructional, operational, planning, command as well as combatant command appointments. These included the Commanding Officer of the first Fighter Squadron, Commanding Officer of Sri Lanka Air Force Palaly, Commandant Flying Training Wing, Base Commander of China Bay, Anuradhapura & Ratmalana Bases, Zonal Commander East and Chief Instructor of Air Wing of the Defence Services Command & Staff College. At the Air Force Headquarters; Air Marshal Abeywickrama served as the Deputy Chief of Staff, Director Air Operations and overlooked the duties as the Director Logistics.