‘Charges framed against Gotabaya on the request of Minister Vajira’ 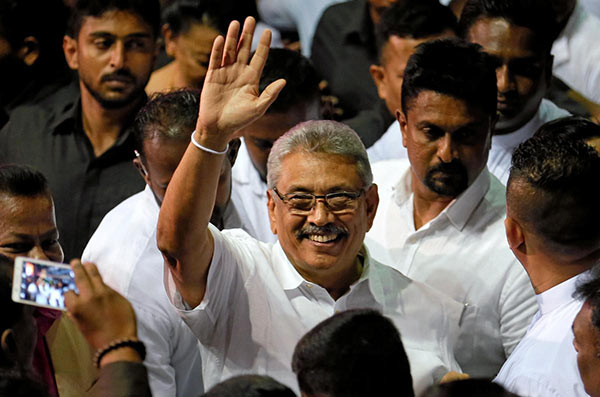 President’s Counsel Romesh de Silva yesterday informed the Court of Appeal that on the very day that former Defence Secretary Gotabaya Rajapaksa was provided with Sri Lankan Citizenship, former President Mahinda Rajapaksa had given similar Citizenships to 21 others born here.

Counsel de Silva stated that these facts could also be proved to Court through the list of names that are included in the petition filed against his client.

Counsel Romesh de Silva told the Appeal Court that with the title Hon. being mentioned before the name of Vajira Abeywardena, the third respondent in the petition and the letters MR, being mentioned before Mahinda Rajapaksa, who had not only become Executive President twice but also the current Opposition Leader, further shows that this petition is nothing but a rag sheet and it does not deserve to be even entertained before an esteemed Court and hence it should be promptly thrown to the wastebasket.

The submission of initial details regarding the citizenship petition of the former Defence Secretary took place for the second successive day yesterday before a three-Judge Bench of the Appellate Court comprising Justices (President) Yasantha Kodagoda, Arjuna Obeysekera and Mahinda Samayawardena.

The day’s proceedings which began at 1.15 in the afternoon lasted till 6.15 in the evening yesterday.

The petition had been filed by two activists a Co-Convener of an NGO (Puravesi Balaya) Gamini Viyangoda and Prof. Chandraguptha Thenuwara.

The aforementioned duo has challenged the Sri Lankan citizenship of Gotabaya Rajapaksa who has even placed his cash deposit with the Election Commission (EC) to contest the 16 November Presidential Poll on the SLPP ticket.

They have prayed the Appeal Court to issue a writ order stating that the dual citizenship certificate, the NIC and the passport issued to the defendant by the relevant institutions are illegal.

The two petitioners have also moved Court to issue a writ order to the Controller General of the Immigration and Emigration, the Commissioner General of the Department for Registration of Persons and the Secretary to the Ministry of Internal and Home Affairs, preventing them from issuing the aforesaid certificates to the defendant.

The petitioners Viyangoda and Thenuwara has also requested the Appeal Court to issue an injunction to prevent Gotabaya Rajapaksa from functioning as a citizen of Sri Lanka and to issue injunctions to prevent the defendant from using his passport bearing number 8305500 and  NIC bearing number 194917210010 respectively.

They have further requested Court to issue an interim injunction preventing the Controller General of Immigration and Emigration, the Commissioner General of the Department for Registration of Persons and the Secretary to the Ministry of Internal and Home Affairs, the Minister of Internal and Home Affairs and the Ministry Secretary, from accepting the defendant as a SL citizen and carrying out work activities to that effect.

PC Romesh de Silva making further submissions before Justices Kodagoda, Obeysekera and Samayawardana stated that the petition had been compiled by the petitioners sans an iota of knowledge of the law or its provisions and purely done so with the politically-induced motive of derailing the Presidential candidacy of his client.

Counsel de Silva was supported in his submissions to Court by President’s Counsel Gamini Marapana, M. U. M. Ali Sabry, Naveen Marapana and Palitha Kumarasingha. They looked into the interests of both Gotabaya Rajapaksa and Opposition Leader Mahinda Rajapaksa.

Counsel Romesh de Silva, making more submissions to Court, to further substantiate the political motive behind the filing of the petition against his client, informed the Bench that the two petitioners had made a request to the Acting IGP on 6 and 8 August this year and had urged him to apprehend Gotabaya Rajapaksa, based purely on this issue.

He then told Court that in a stunning move, the CID had begun to even initiate an investigation regarding the Sri Lankan citizenship of his client, no sooner the request had been made to the Acting IGP by the two petitioners concerned.

Counsel de Silva stated that the two petitioners had even stated in their petition that they too had supported the probe launched by the CID against Rajapaksa.

He further told Court what clearly shows the political motives behind these actions is that the complaint and the ‘B’ report compiled by the CID had been submitted to the Colombo Chief Magistrate’s Court, prior to seeking an order to commence the inquiry against the former Defence Secretary.

The consideration of the petition is scheduled to continue again at 9.30 a.m. today (4).

The Controller General of the Department of Immigration and Emigration, the Commissioner-General of the Department of Registration of Persons, Minister Vajira Abeywardena, Secretary to the Ministry of Internal & Home Affairs and Provincial Councils & Local Government, Opposition Leader Mahinda Rajapaksa, former Defence Secretary Gotabaya Rajapaksa, Acting Inspector General of Police (IGP), Director of the Criminal Investigation Department (CID), Senior Deputy IGP of CID and Officer in Charge of CID’s Special Branch have been cited as the respondents to the petition.

The petitioners allege that Gotabaya Rajapaksa has obtained a passport and a National Identity Card (NIC) claiming that he revoked his US citizenship.

The petitioners further stated that they have the necessary information to prove the former Defence Secretary did not submit proper documentation to verify the revocation of his US citizenship when obtaining a Sri Lankan passport and an NIC.

Hence, the petitioners request the Appeal Court to deliver an order suspending the issuance of a passport and an NIC to Gotabaya Rajapaksa.

They have also sought an interim order preventing the functioning of said passport and NIC until Court delivers a verdict.

Home » ‘Charges framed against Gotabaya on the request of Minister Vajira’