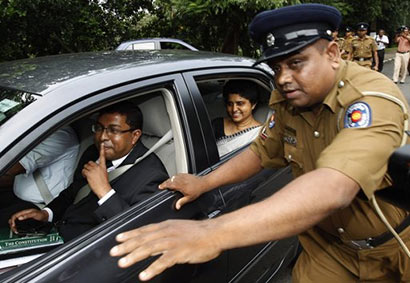 Chief Justice Dr. Shirani Bandaranayake arrived at the Parliamentary complex a short while ago.

The Chief Justice is to appear before the Parliamentary Select Committee which will examine the charges brought against her through the impeachment motion.

According to the Deputy Speaker of Parliament, Chandima Weerakkody, the Parliamentary Select Committee is due to convene shortly.

Yesterday the Supreme Court, recommended the postponement of the Parliamentary Select Committee sessions that were to examine the impeachment motion, until the court gives its determination on the interpretation of the Constitution.

The Supreme Court made this recommendation when the writ applications referred to it by the court of appeal for an interpretation of the constitution, were taken up yesterday.