Dengue nation: The rise and spread of a viral challenge 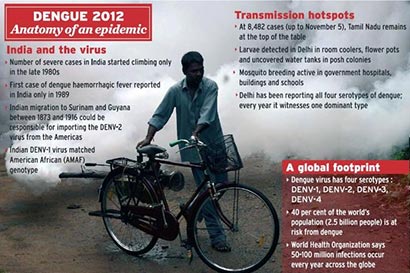 The Sunday Story India plays host to all four types of dengue viruses now. New scientific insight points to the role of migration in their spread. The dissemination trail of the viruses includes Sri Lanka, Africa and the Americas. Disturbingly, morbidity and mortality in the country are rising

The last few decades have seen dengue, a mosquito-borne viral infection, becoming one of the major public health concerns in the tropical and sub-tropical countries. So much so that over 40 per cent of the world’s population (2.5 billion) is at risk from dengue. According to the World Health Organisation, 50-100 million infections occur every year across the globe.

From less than 10 in the 1970s, the number of countries endemic for the disease has shot up to nearly 100. The major regions where dengue epidemic is seen are in southeast Asia, western Pacific, Africa, Americas and eastern Mediterranean.

Fortunately, of the millions who get infected, the majority do not even exhibit symptoms. Though self-limiting in many cases, a sizeable population suffers from dengue fever. The fever is also usually self-limiting and death is uncommon. But depending on several factors, including age, dengue fever can progress to severe forms. Nearly half-a-million suffer from dengue haemorrhagic fever (DHF), a severe form of the infection. Mortality is quite high in the case of dengue haemorrhagic fever. The extreme form is dengue shock syndrome, and the proportion of patients who die is indeed high.

With its increased population growth, density, unplanned urbanisation and increased vector density, India provides a perfect milieu for dengue to become epidemic. Still, what is worrying is that the infection has gained ferocity within a short time. According to a paper published recently in the journal Infection, Genetics and Evolution, the number of severe cases in India started climbing as recently as the late 1980s; disease profile was mild in the 1960s. The first case of dengue haemorrhagic fever was reported only in 1989.

The reason for this is not difficult to find. Dengue has four virus serotypes — DENV-1, DENV-2, DENV-3 and DENV-4 (classified based on the antibodies developed), and there is great genetic diversity within each serotype. Of the four serotypes, DENV-2, with six genotypes, exhibits the most genetic diversity.

Thanks to increased global travel connecting endemic countries, different genotypes and serotypes tend to get imported into and exported from India. In fact, the long-range migrations of the four dengue serotypes between endemic countries show how admixture of foreign types with locally prevalent ones determines the evolution of a possibly virulent strain in a relatively short duration of time.

A 2012 paper by National Institute of Virology (NIV) research scientists, states: “Our studies [of the four isolates] prove that the population of dengue viruses presently circulating in India is different from that in the 1960s.”

In the case of India, studying all the four serotypes helps us trace the past mass movement of people from and to India.

DENV-2 is a predominant serotype causing dengue fever and dengue haemorrhagic fever outbreaks. Researchers from the Pune-based NIV found that Indian DENV-2 strains isolated from 1956 to 2005 belonged to only two of the six genotypes — American and Cosmopolitan. Interestingly, the American genotype which was prevalent prior to 1971 eventually gave way to the Cosmopolitan genotype. The American genotype was imported to India over 100 years ago corresponding to high traffic between India and South America.

The study published in the Journal of General Virology found that Indian migration to Surinam and Guyana between 1873 and 1916 was responsible for importing the DENV-2 virus from Americas to India. The Cosmopolitan genotype was “circulating during that [post 1974] time” and got established post-1980. They postulate that positive selection might have played a role in changing the epidemiology of DENV-2 from American to Cosmopolitan genotype during the 1970s.

The number of outbreaks caused by DENV-1 serotype, which is circulating since 1940s, is increasing, though the number is less than that for DENV-2. Even the severity of the outbreaks as seen in Delhi in 1997, 2006 and 2008 clearly show that the disease profile is suddenly changing from mild to severe.

A 2011 study published in the Infection, Genetics and Evolution journal attributes the change in disease severity to “changes in the genetics of DENV-1 virus.” This could either be due to “fresh introductions” of genetic material from elsewhere or “evolution in situ.”

Unlike DENV-2 that showed affinity to the American and Cosmopolitan genotypes, Indian DENV-1 virus matched the American African (AMAF) genotype. A closer look reveals four lineages of DENV-1 virus. One of the lineages was imported from Singapore (1964-1975), while another had evolved in situ. The study also found import from Africa (1953-1968) and export to the Americas (1955-1965) in the “aftermath of World War II.”

“The cosmopolitan characteristic of the [AMAF/Cosmopolitan] genotype reflects the movement of labourers between the three continents of Africa, Asia and America in the early 1990s,” the paper states.

If DENV-1 serotype was imported from Africa and Singapore, studies have shown that Sri Lanka played a significant role in shaping DENV-3 serotype currently circulating in India. The Indian DENV-3 isolate is particularly interesting as the lineages show similarity with isolates from other regions. The 2012 paper in the Infection, Genetics and Evolution journal found maximum similarity between Indian and Sri Lankan isolates.

The authors found that during 1981-1988 “an introduction into India from Sri Lanka” had happened. “Two events, one exportation [of DENV-3] from India (pre-DHF period) and one importation from Sri Lanka (post-DHF period) occurred,” they write. Aside from the India-Sri Lanka migrations, during 1999-2003, India became a hub for virus export to Saudi Arabia, Africa and China. Additionally, there is evidence of virus movement between India and Middle East. Since 1993, there has been an export of the DENV-3 virus to Middle East, probably due to increased pilgrimage to Haj owing to subsidy, the authors think.

The study of DENV-4 reveals that India was the centre of dispersal to Africa, and South-east Asian countries. Transportation of DENV-3 and DENV-4 viruses was seen between India and Sri Lanka during the 1970s and 1980s. This correlates to human movements during the Sri Lankan conflict, and probably played a role in the “evolution and dispersion of major genotypes of DENV-3 and DENV-4 which are more virulent and show higher dissemination potential.”

Home » Dengue nation: The rise and spread of a viral challenge