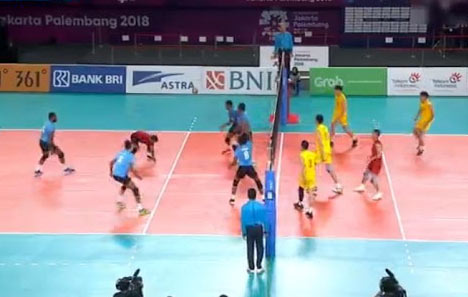 Following an unexpected loss to Vietnam and a narrow victory over Thailand, the match against Sri Lanka was vital for China to advance to the next round as top two of the group.

China got off to a flying start, leading Sri Lanka 5-1 just minutes into the first set, forcing Sri Lanka to call a time-out. After that, Sir Lanka tried to put their acts together, but failed to stop the Chinese who further enlarged the margin and ended the set 25-15.

The resilient Sri Lanka came back to claim three straight points at the beginning of the second set. Chinese coach Shen Qiong called a time-out, and with improved blocking, China managed to level the score 4-4.

The two sides took turns to lead in the rest of the set, and despite another time-out and two replacements, China lost 20-25 following several strings of straight points by Sri Lanka.

The third and fourth sets saw the Chinese go all out to regain their momentum. They left the opponents no chance and sailed to the victory with 25-14 and 25-17, respectively.