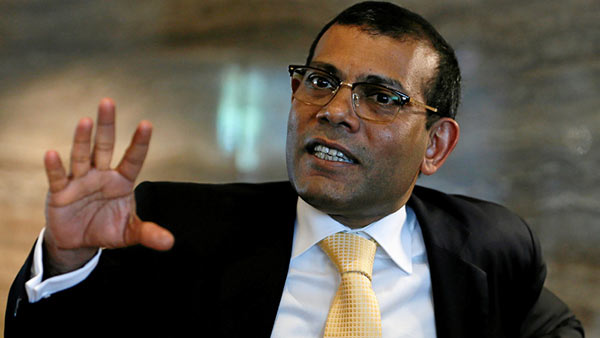 China has dragged the Maldives into a debt trap and any future government formed by the Opposition will be unable to repay the loans unless a review cuts them to real value, exiled former President Mohamed Nasheed told Reuters on Monday.

The Maldives, home to 400,000 people and best known as a tropical paradise for tourists, has experienced political unrest since Nasheed, its first democratically-elected leader, was forced to quit amid a mutiny by police in 2012.

Nasheed, now living in Sri Lanka, said President Abdulla Yameen’s government had given China a contract to build a 1.4-km (0.9-mile) bridge in Male, the capital, at a cost of $300 million, or about four times the government estimate.

“This is just one example,” Nasheed, the leader of the opposition Maldivian Democratic Party (MDP), told Reuters. “So we have to deal with this.”

Total loans to build infrastructure, provided by China’s Exim bank, should be “easily more than $2.5 billion,” Nasheed said, or roughly equivalent to the Indian Ocean archipelago’s gross domestic product (GDP). “They have done this through creating a debt trap and then using debt as a disciplining agent,” he said in an interview in a suburb of the Sri Lankan capital, from where he is battling to defeat Yameen in the latter’s bid for re-election in September.

The government debt repayment to China alone in 2020 will be $750 million, about half of that year’s total revenue, he said.

“There is no way whatsoever we would be able to do that in 2020 and no one is going to give us the money,” Nasheed added.

He said, “We would have to renegotiate. It is a big cheat. We can’t agree to pay this amount. But we will pay the real amount.”

The government did not immediately respond to telephone calls and text messages from Reuters to seek comment.

Nasheed was convicted on terrorism charges in 2015 and sentenced to 13 years in prison after a controversial and widely criticized trial. But he was allowed to go on medical leave to Britain, where he received political asylum.

Since last year he has been working to unite Opposition parties to defeat Yameen.

The Opposition has accused the government of locking up most of its leaders who could challenge Yameen’s bid for a second five-year term, thus disqualifying them from contesting, but the government denies this.

Nasheed campaigned from Sri Lanka to win last week’s primary election, but the Elections Commission declined to accept the result and vowed to take action against the MDP.

The Opposition is likely to agree on a common candidate if Nasheed is not allowed to contest, but the candidate will be revealed only after authorities call for nominations, since a challenger to Yameen also could end up in jail, Nasheed added.

The Maldives has suffered upheavals since February, when Yameen imposed a state of emergency to annul a Supreme Court ruling that quashed the convictions of nine Opposition leaders, including Nasheed.

During the 45-day emergency, Yameen’s administration arrested former president Maumoon Abdul Gayoom, the chief justice, another Supreme Court judge and a Supreme Court administrator on charges of trying to overthrow the government.