China lands spacecraft on far side of moon 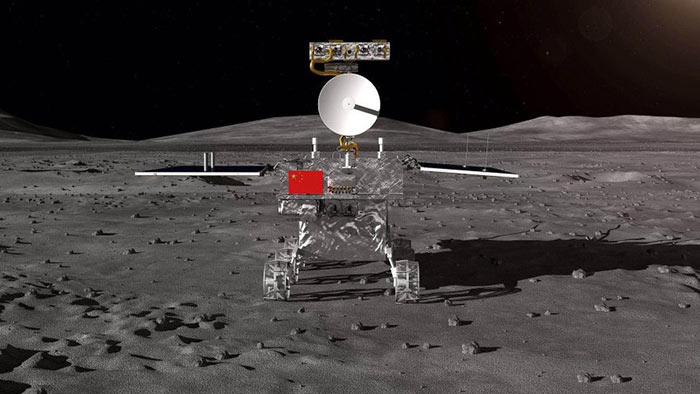 A Chinese spacecraft has become the first ever to land on the far side of the moon, according to state-run media, in a giant leap for human space exploration.

Official confirmation of the landing came two hours later via state broadcaster CCTV, which said the lunar explorer had touched down at 10.26am (2.26am GMT). The Communist Party-owned Global Times also said the probe had “successfully made the first-ever soft landing” on the far side of the moon.

The mission aims to take detailed measurements of the moon’s terrain and mineral composition. The Aitken basin is thought to have been formed during a gigantic collision very early in the moon’s history. The collision is likely to have thrown up material from the moon’s interior, meaning that Chang’e 4 could provide new clues as to how the natural satellite was formed.

The successful landing was touted as a “huge feather in China’s cap” by Malcolm Davis, senior analyst in defence strategy and capability at the Australian Strategic Policy Institute.

The landing was also greeted as “an impressive accomplishment” by Nasa administrator Jim Bridenstine.

Davis said China’s successful landing could “set a fire under the Americans”, who may not like the idea that the next person to set foot on the moon may be a Chinese Taikonaut, as they are unofficially called.

“I imagine we will see an announcement the Chinese do intend to send Taikonauts to the moon by 2030,” said Davis.

Chang’e 4 entered an elliptical path around the moon at the weekend, drawing as close as 15km (9 miles) from the surface.

Spacecraft have taken pictures of the moon’s far side before, but no lander has ever touched down there. The move marks a step towards China’s ambition to become a leading power in space exploration alongside the US and Russia.

Davis said China’s extraterrestrial ambitions seemed to be driven by multiple factors, including a desire for military dominance of space. Other motivations include the access to vast resource wealth provided by the moon and asteroids, in particular, Helium-3 which is believed to exist in great abundance on the moon, and also that dominance of the region would be a sign of China’s growing power.

“China has been very clear in its understanding of this. They have compared the moon to the South China sea and Taiwan, and asteroids to the East China sea. They’re making a very clear geopolitical comparison with what’s happening with space and we need to pay attention to that.”

2 Responses to China lands spacecraft on far side of moon

Home » China lands spacecraft on far side of moon