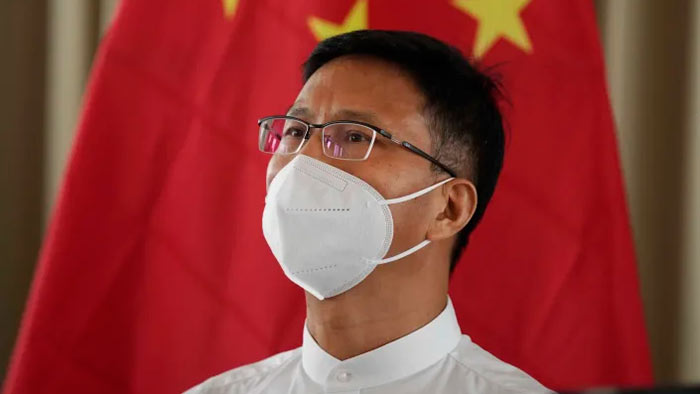 China’s ambassador to Sri Lanka said Monday it is considering a request for $2.5 billion in assistance to help the island nation through a debt and foreign currency crisis.

Sri Lanka needs to make nearly $7 billion in payments on foreign loans this year, but Qi was non-committal about a request to restructure China’s loans to Sri Lanka.

“Our ultimate goal is to solve the problem, but there may be different ways to do so,” he said.

Sri Lanka’s foreign reserves are dwindling at a time when it faces huge debt obligations. The country’s struggle to pay for imports has caused shortages of medicine, fuel, milk powder, cooking gas and other essentials, with people waiting in long queues to get fuel.

Residents are enduring daily power cuts due to a shortage of fuel to operate the generating plants and dry weather has sapped hydropower capacity.

The Central Bank allowed the local currency to free float earlier this month, causing a sharp increase in prices.

Sri Lanka’s economy depends heavily on tourism and trade and the pandemic has been disastrous, with the government estimating a loss of $14 billion over the last two years. The economy is estimated to have contracted by 1.5 % in July- September 2021, according to the central bank.

Sri Lanka’s foreign reserves are shrinking partly because of construction projects built with Chinese loans that are not making money. China loaned the country money to build a seaport and airport in the southern Hambantota district and a wide network of roads.

Central Bank figures show that current Chinese loans to Sri Lanka total around $3.38 billion, not including loans to state-owned businesses, which are accounted for separately and thought to be substantial.

Qi said that since the outbreak of COVID-19 in 2020, China has provided $2.8b in financial help to Sri Lanka.

“Our aim is to help Sri Lanka to overcome the current difficulties,” he said.

Last week, neighboring India extended a $1 billion credit line to Sri Lanka to be used for importing food, medicines and other essentials from India.

The two Asian giants are vying for influence in the Indian Ocean and consider Sri Lanka strategically important.