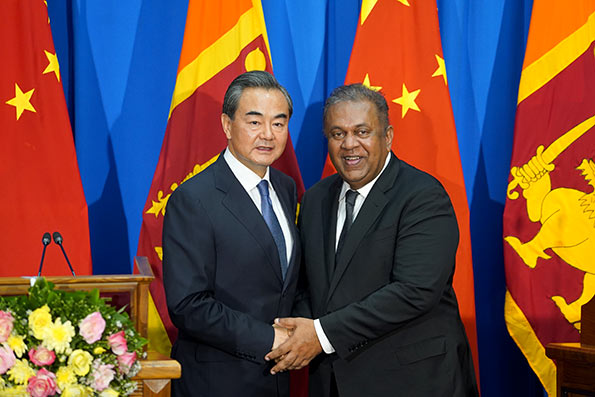 “We’ll take the building of the maritime silk road as a priority to better align our development strategy including your five-year development plan so that we can come up with a comprehensive blue print for future cooperation, so that we can help Sri Lanka build itself into a shipping center in the Indian Ocean,” Wang said.

The silk road is seen as a way of encircling India and controlling port access along sea lanes linking the energy-rich Persian Gulf and economic centers in eastern China.

Wang said however that China’s relations with Sri Lanka does not target any other nation.

“There is a consensus between China and Sri Lanka that our cooperation does not target any third country nor will it affect our respective relations with other countries. We stand ready to work more closely with other regional countries for the purpose of achieving common development.”

Sri Lanka earlier this year allowed a $1.5 billion China-funded port city project to resume a year after it was suspended to study effects to the environment. The city is to be built on reclaimed land off Sri Lanka’s west coast and include a golf course, marinas, apartments, hotels and malls.

The project created disquiet in neighboring India over the possibility China might be allowed outright land ownership.

The two ministers also discussed the South China Sea dispute over which an international tribunal is soon expected to rule. China which claims most part of the sea is boycotting the case filed by the Philippines challenging it.

Wang said Sri Lanka expressed “understanding” of China’s position while Samaraweera said that he called for constructive dialogue to resolve the dispute and ensure peace and stability in the region.