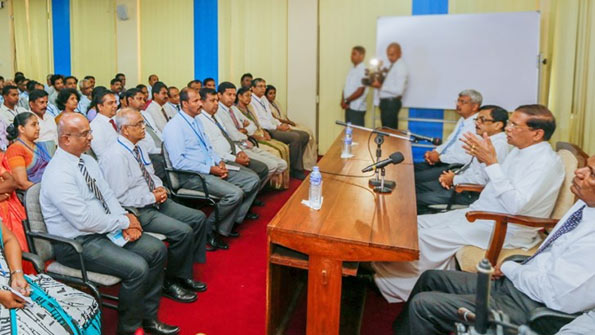 The aim of this visit is to look into the activities of the TRC as it comes under the purview of the President.

Even though it comes under the purview of the President of the country since 2004 this is the first time that a President visited the TRC to inquire into its affairs.

The staff of the TRC warmly welcomed President Sirisena and expressed their appreciation for his visit to the TRC.

The President focused on the institutional structure of the TRC, during the discussion with the Board of Directors. He instructed to recruit qualified officers for the vacancies prevailing in the TRC.

“It is reported that some private television channels allocate 80% of their air time to criticize the government. They only give less than 20% of the time for acknowledging people about the development activities of the country and the policies of the government”, the President said.

“There is no problem of criticizing the government. But the media institutions have a responsibility to fulfill for the country by conveying fair and balanced information to the people”, he pointed out.

“It is not a task to alleviate the media, but to give the right to the people for a meaningful media usage”, the President added.

The officials made the President knowledgeable about the steps to amend the Telecommunication and Regulatory Act.

When the officials pointed out the issues arisen due to the VAT imposed on the telephone charges, the President stated he would make the arrangements to solve them.

The Chairman of the TRC and the Secretary to the President P. B. Abeykoon and senior officials also participated in this discussion.

8 Responses to Media responsibility is to provide balanced information – President