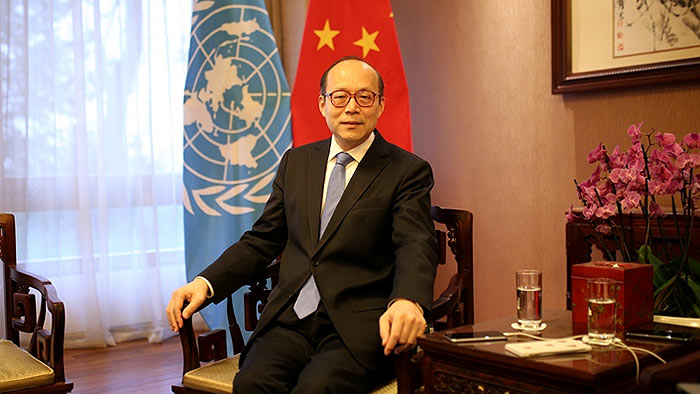 On Thursday, Chinese Permanent Representative in Geneva Ambassador CHEN Xu extended China’s strong support to Sri Lanka in his official statement in the Interactive Dialogue on the OHCHR Report on Sri Lanka during the 46th Session of the Human Rights Council.

The full text of the statement is as follows:

“It’s the consistent stand of China to oppose politicisation of and double standards on human rights, as well as using human rights as an excuse for interfering in other countries’ internal affairs. We are concerned about the clear lack of impartiality shown in the OHCHR’s report to this session on Sri Lanka and express our regret over the failure of the OHCHR to use the authoritative information provided by the Sri Lankan government.

“The so-called “preventive intervention” and the proposed targeted sanctions contained in the OHCHR’s report are clear interference in the internal affairs of Sri Lanka and exceed the mandate of the OHCHR. We hope that the HRC and the OHCHR will strictly follow impartiality, objectivity, non-selectivity and non-politicization principles, respect the sovereignty and political independence of all nations, respect the efforts of the nations for the protection and promotion of human rights, advocate constructive dialogue and cooperation, and abandon the practice of interfering in the internal affairs of other countries and exerting political pressure.”

Prior to the opening of the 46th Session of UNHRC, President Gotabaya Rajapaksa wrote a letter to Chinese President Xi Jinping requesting China’s understanding and assistance on the resolution. On 24th February, Foreign Minister Dinesh Gunawardena also made a telephone call to Chinese State Councilor and Foreign Minister Wang Yi to seek the continued solidarity and support. Wang Yi reiterated that China is willing to unswervingly support each other with Sri Lanka to jointly safeguard the legitimate rights and interests of developing countries, the basic norms governing international relations, and the purposes and principles of the UN Charter including non-interference in other countries’ internal affairs.