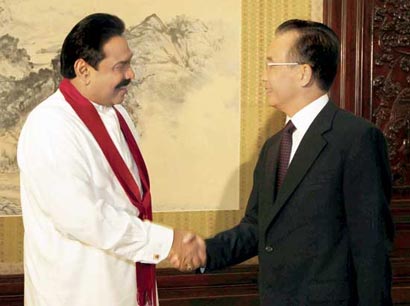 China is committed to strengthening the friendship with Sri Lanka and will extend its fullest support in all necessary situations to Sri Lanka in international fora, said Chinese Prime Minister Wen Jiabao.

He said this during a bilateral meeting with President Mahinda Rajapaksa at the Prime Minister’s residence in Beijing yesterday.

Expressing his gratitude for the Chinese assistance for the number of ongoing projects in Sri Lanka, President Rajapaksa apprised the Chinese Prime Minister about the post-conflict developments in the country and the government’s commitment to carry out major infrastructure development to ensure balanced economic progress in all regions.

Prime Minister Wen Jiabao praised the government’s ability to complete the first phase of the Hambantota port and said his government is willing to provide financial assistance for the construction of the second phase of the port. President Rajapaksa and the Chinese Prime Minister also discussed the Norochcholai power plant constructed with Chinese aid and ways and means to increase the number of flights between the capitals of the two countries.

Much to learn from China on path to economic progress – President

“When considering the relationship between economic development and social equality, it is clear that the former should be achieved by seeking better understanding between the cultures and traditions of the people of a country and their future expectations. I believe we can learn much from China in this regard,” said President Mahinda Rajapaksa yesterday when he was conferred an Honorary Doctorate by Beijing Foreign Studies University.

The citation of the Doctorate stated that it was awarded for fostering peace and reconciliation within the country and the world, creating an environment in which all the communities can live in harmony and strengthening friendship and understanding between Sri Lanka and China.

The President acclaimed the contribution made by China as a dominant economic power to the development of many countries including Sri Lanka.

“China is also engaged in considerable work on infrastructure development in many parts of the country, that contribute to the rapid economic development that we seek to achieve after the successful defeat of terrorism,” he said.

“I must also record here the deep gratitude of the people of Sri Lanka to China for their commitment to support Sri Lanka in the battle against terrorism that we concluded with success; and for the assistance given for reconstruction and resettlement in the former conflict zone in our country,” the President added. He elaborated on the long links that have existed between Sri Lanka and China which date back to the 4th Century.

Having mentioned the development of the relations between the two countries which were influenced by Buddhism and East-West trade, President Rajapaksa noted the significance of the Rubber-Rice Pact in 1952 that resulted in a great boost.

“It is worth recalling that Sri Lanka signed this pact despite much opposition from our former colonial rulers and the countries of the West that were opposed to the People’s Republic of China,” he added.

Later, the newly built Sri Lanka Research Centre at Beijing Foreign Studies University was opened by President Rajapaksa. He was also conferred the honorary lifetime presidency of the Research Centre by Chancellor of the University Prof Chen Yulu.

The measures taken by President Rajapaksa are instrumental not only in improving the standard of education in China and Sri Lanka, but also creating world peace, Prof Yulu said. The President met the Chinese students studying Sinhala language at the university. He also planted a tree within the university premises as a token of the friendship between China and Sri Lanka.

5 Responses to China will assist Lanka when needed – Chinese PM