UNP in a deadlock 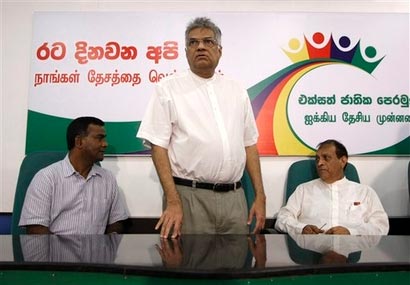 With the party in a deadlock, with the Leader refusing to budge and Reformists threatening to take to the streets to force him out, UNP General Secretary MP Tissa Attanayake yesterday declined to comment on the ongoing crisis.

National List MP Attanayake, widely believed to be a Wickremsinghe loyalist, told The Island that he wouldn’t discuss the issue as speaking out would only complicate matters further.

An irate Attanayake said that his comments on the contentious issue of Reformists’ challenge could exacerbate the situation. He urged The Island to get in touch with those willing to discuss the leadership issue.

Another earlier Wickremesinghe loyalist and the party’s Deputy Secretary General designate Dr Jayalath Jayawardana yesterday said that most of the people in the party were frustrated and cut up with the situation they were in. “I am fed up”, he said

He insisted that he is in no one’s camp and that in fact his political guru was Sajith’s late father Ranasinghe Premadasa and he will never forget that.

I took the post of JSS President to fight on behalf of UNP workers who are being victimised by this government and not for personal glory or to oust Sajith. In fact Sajith continues to be responsible for the trade union movement.

He said the party was in a truly deadlocked situation as Ranil Wickremesinghe was elected unanimously at the last party convention in December last year and therefore he could go on till this December. In terms of the Constitution he could be replaced before that date only if he resigned or something happened to him, but he was not willing to resign, the MP said.

“Joseph Michael Perera, John Amaratunga, Tissa Attanayake, Wijedasa Rajapakshe, Lakshman Kiriella and I took up this issue with the Leader on Thursday, the day after the noisy party group meeting, but he was adamant that he would continue till the end of the year,” Jayawardana said.

As the Chief Organiser for Negombo, he said he was worried about facing the forthcoming election as a divided party.”Otherwise we have everything under wraps here”, he said.

Asked why none of them spoke up for the leader at the group meeting, Jayawardana claimed that there was total pandemonium with reformists shouting abuse, therefore it was not possible for anyone to speak.

Questioned as to the solution he would propose to rescue the party from the present mess, Jayawardana said only God knew the answer.

Ratnapura District MP Ranjan Ramanayake lashed out at the factions led by Wickremesinghe and Premadasa for causing debilitating setbacks. Due to their actions the party had suffered irreparable damage, the UNPer said, alleging that the incumbent leadership and so-called Reformists were acting as if they had taken a contract from the Rajapaksas to ruin the UNP.

Responding to a query, MP Ramanayake said that in spite of the UNP having a chance to secure the Colombo Municipal Council at the forthcoming LG poll, the two groups were fighting it out. Had there been any love for the party and a determination to defeat the UPFA in Colombo, they would never engage in a public fight.

MP Ramanayake accused both factions of turning a blind eye to the plight of defeated Opposition presidential candidate General Sarath Fonseka now languishing behind bars on a bogus charge.

He asserted that the UNP had failed to exploit the ground situation caused by economic difficulties and a section of the international community taking on the Rajapaksasas due to rifts among various factions.

13 Responses to UNP in a deadlock

Home » UNP in a deadlock