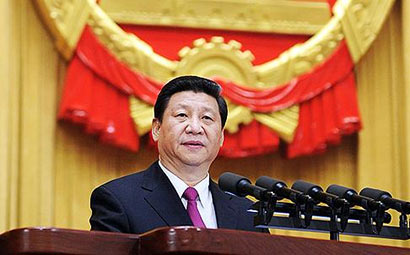 Xi told his Sri Lankan counterpart Mahenda Rajapakse over phone that China supports his country’s efforts to protect its national sovereignty, and would continue to offer assistance.

It appears that Beijing may do the same, if comes to voting, continuing its efforts to court Colombo, much to discomfiture of India.

During their telephone conversation, Rajapaksa congratulated Xi on his election as Chinese president, and said the two countries are close friends, according to state-run Xinhua news agency reported.

For many years, bilateral ties have maintained a healthy and stable development momentum, with fruitful cooperation in all sectors.

Xi also thanked the Sri Lankan president for the country’s long-term support on issues regarding China’s core interests and said China highly values the development of its relations with Sri Lanka.

Xi said he hopes the two countries will make concerted efforts to promote their comprehensive relations of cooperation and partnership to even higher levels.

The US is scheduled to move a resolution at the UN Human Rights Council against Sri Lanka over alleged human rights violations.

US had adopted a similar resolution last year with India’s support which bound Colombo to make rapid progress on reconciliation with the ethnic Tamils.

According to rights groups, up to 40,000 Tamils were killed in the army’s final battle against LTTE rebels. (Courtesy: India Times)