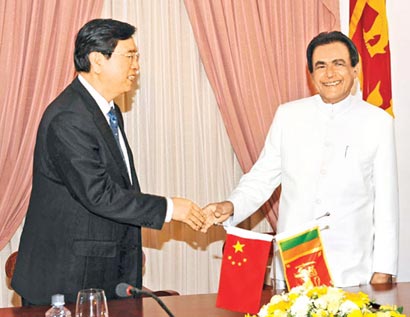 Sri Lanka and China signed six agreements to enhance co-operation in the fields of technology, industry, information technology and construction at the Prime Minister’s Office yesterday.

The signing of agreements took place in the presence of Prime Minister D.M. Jayaratne and Chinese Vice Premier Zhang Dejiang.

The two Governments also signed an agreement for the maintenance and development of the Bandaranaike Memorial International Conference Hall (BMICH) which is a donation from China.

The Road Development Authority (RDA) signed an agreement with a Chinese company for the construction of the last stage of the Southern Expressway from Pinnaduwa to Godagama.

The two Governments inked another agreement for the enhanced co-operation in the field of Information and Communications. An MoU was also signed for the development of maritime ports. Acting Ports and Aviation Minister Rohitha Abeygunawardena and Chinese Transport Minister Lin Shenjin were the signatories. The second phase of the Hambantota Port will commence under this agreement and the Chinese Government, will provide a loan of US $600m which is payable within 20 years.

This grant of US $500,000, would be utilized for the promotion of IT literary among the youth community in Sri Lanka.