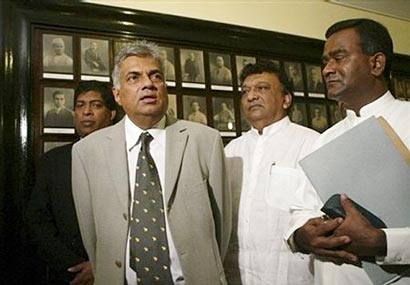 The United Notational Party (UNP) said that it will oppose moves to any constitutional amendment that would pave the way for President Rajapaksha to contest for another term in office.

The general secretary of the UNP, Tissa Attanayaka pointed out that president Rajapaksha who promised to abolish the executive presidency has now gone back on his word.

“In 2005 when Rajapaksha first contested for presidency, he made a clear statement that he will abolish the executive presidency and now he is moving towards a dictatorship” said Tissa Attanayaka.

The General Secretary of the UNP also called upon the government to make clear what constitutional amendments are being proposed.

“We don’t have a clear picture of what constitutional amendments are being proposed and parliament needs to be informed” said Attanayaka.

Meanwhile ruling party parliamentarian Vasudeva Nanayakkara said that he will oppose any move to strengthen the executive presidency.

He said that he has always opposed the executive presidency.

Responding to a question Nanayakkara said that moves that would enable the president to seek another term will be opposed while being with the government.

“our intention is to make the government more people friendly and we will do this while staying with the government . I have no intention to resign even if our protest does not yield results” Said Vasudeva Nanayakkara.

1 Response to Removal of two term restriction on Presidency opposed