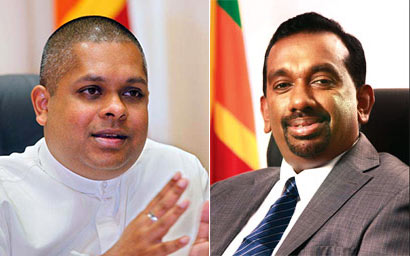 The CID yesterday recorded the statements of the former Monitoring MP of the External Affairs Ministry Sajin de Vas Gunawardane and former Sports Minister Mahindananda Aluthgamage over corruption charges made against them by Voice against Corruption (VaC), an organization spearheaded by JVP Provincial Councillor Wasantha Samarasinghe, it is learnt.

He said that the group VaC had complained to both the CID and the Bribery Commission against him.

“I will remain silent for some time till the investigations against me are over. I will prove my innocence. Afterwards, I will take legal action against Mr. Samarasinghe for making false allegations against me,” Mr. Gunawardane said.

The VaC lodged a complaint at the Bribery Commission asking it to probe the assets of both Mr. Gunawardane and Mr. Aluthgamage. Mr. Samarasinghe, in his complaint, accused both of them of amassing wealth unlawfully during the term of the last government. He said he would see these cases to the end.