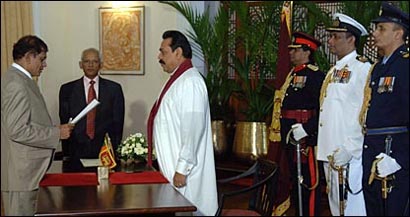 The Chief Justice (CJ) of Sri Lanka has strongly defended the recent Supreme Court verdict that ruled court martial is a competent court.

The ruling has come under strong criticism from senior lawyers and the opposition political parties after it sealed the fate of the former army commander, as a parliamentarian.

A group of lawyers has even launched a campaign to sign a petition urging the Supreme Court to reconsider its verdict.

“In Sri Lanka, only the high court and the military court that can sentence someone with capital punishment, for example,” he said.

Mr de Silva, who will be retiring after two years in the office, says even the Supreme Court does not have the powers to impose capital punishment.

“According Sri Lanka’s constitution, a sentence can be imposed only by a competent court according to the 13 amendment,” he said.

“And the court martial can only impose punishment on those come under the military law, it cannot sentence everybody. That is why the Supreme Court decided that military court is a proper court.”

Mr de Silva says that the military law applies to the former Gen Sarath Fonseka as he was charged within six months of his retirement.

As a result of the Supreme Court verdict, says the CJ, anybody sentenced by a military court should also lose his/her parliamentary seat as per the constitution.

“Even Mr Fonseka himself has established 150-200 military courts.”

However there have been some media reports that the Supreme court panel has initially decided to reject the military court as a legitimate court but has changed the verdict after political pressure.

The CJ categorically rejected that suggestion.

“There was no political pressure at all. Our judges are not influenced by anybody. They stick to their own opinion,” he told BBC Sinhala service.

“If there have been any difference of opinion, those judges have the opportunity to issue a separate judgement.”

Mr de Silva stressed that it was a unanimous verdict of all the members of the panel.

The Chief Justice also categorically rejected recent media reports that said he offered to resign due to political influence by President Mahinda Rajapaksa.

The outgoing CJ said there has been no political influence during his two year tenure in office.

The government categorically rejected the reports when Leader of the Opposition, Ranil Wickrasinghe, raised a question in the parliament.

“That was a false report. I had no political pressure at all,” CJ Asoka N de Silva said.

“I don’t read all those reports and I wouldn’t be able to do anything else than responding to media reports if I was to deny those.”

The Chief Justice retires in mid-May after serving two years in the office.

“I believe and I am satisfied that I worked according to my conscionse during this period,” he added.

BBC Sandeshaya will be carrying a series of interviews with the outgoing CJ during the next few days.