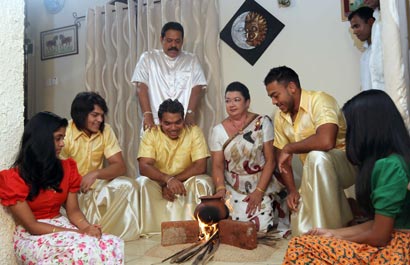 President Mahinda Rajapaksa and his family celebrated the Sinhala and Tamil New year rituals at Carlton Residence in Tangalla, Hambantota yesterday on 14 April. First Lady Shiranthi Rajapaksa conducted all the rituals at the auspicious time with the President Rajapaksa and other family members assisted her.
The auspicious time for the lighting of the hearth was at 1.06 pm. President Mahinda Rajapaksa, First Lady Shiranthi Rajapaksa and sons Namal, Yoshitha and Rohitha attended the symbolic tradition of boiling milk at the auspicious time.
As mentioned by astrologers milk rice was prepared with jaggery and ghee, attired in golden colour and facing the Northern direction. The auspicious for partaking of the first meal for the New Year was at 3.18 pm. In addition to taking the first meal, transactions were also conducted attired in golden colour and facing the Northern direction. President Rajapaksa, the pilot who crafted the environment for the entire nation for the partaking of the meal prepared with new rice of a new yield, also joined in this tradition setting an example to the whole country.
President Rajapaksa’s brother, Defence secretary Gotabaya Rajapaksa also participated the celebrations. They all are seen here with locals and President’s close supporters enjoying Sinhala Avurudu traditions at Carlton House.

Meanwhile in his message for the Sinhala and Tamil New Year issued by the President Media Unit, President Mahinda Rajapaksa stated that Sinhala and Tamil New Year is the greatest traditional celebration of Sri Lanka which is celebrated in the every corner of the island by our ancestors for over thousands of years.  It is the celebration of agricultural pride of Sri Lanka.

We welcome the Sinhala and Tamil New Year at a time when there is a rapid development in all sectors including the agriculture sector in Sri Lanka. Hence, we celebrate this traditional ceremony over the years.   It has become a very elegant and meaningful function in the nation. We can hand it over to the future generation encouraging our children to celebrate the New Year according to traditions and customs.

The anointing of oil on the head for the New Year will take place on Saturday the 16th at the auspicious time of 7.41 am. 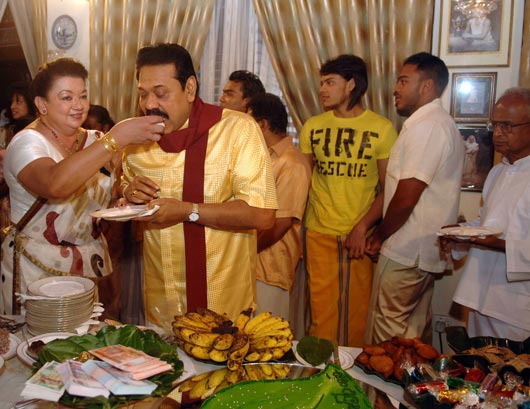 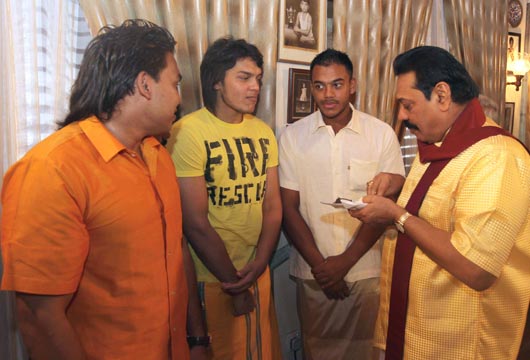 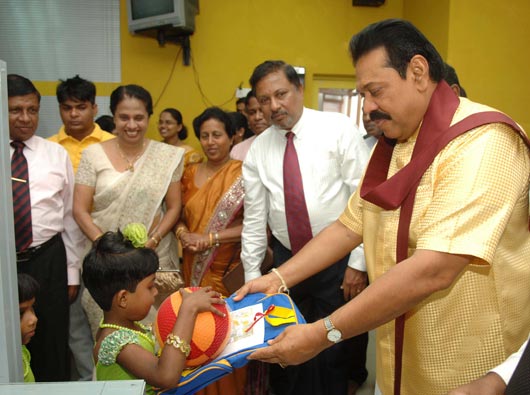