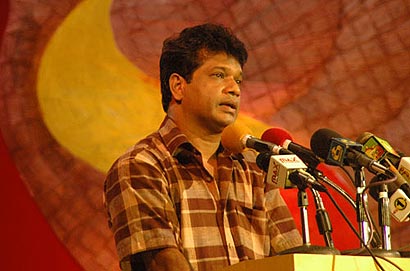 JVP heavyweight Lal Kantha yesterday asserted that President Mahinda Rajapaksa’s government had suffered serious injuries, though it emerged victorious in its battle against Chief Justice, Dr. Shirani Bandaranayake. Therefore, he, too, would not survive the crisis caused by the impeachment of Dr. Bandaranayake, Lal Kantha said.

The JVP trade union leader was addressing a gathering of workers’ representatives at the New Town Hall yesterday.

Lal Kantha emphasized that those in power couldn’t avert the forthcoming collapse of the authoritarian regime. That was the reality, Lal Kantha said, asserting that Dr. Bandaranayake’s removal had caused an unprecedented friction between parliament and the judiciary.

Having lambasted the government for impeaching Dr. Bandaranayake, Lal Kantha alleged that the judiciary could not absolve itself of the responsibility of causing the impeachment crisis.

In fact, the 18th Amendment to the Constitution was nothing but the cause of the current crisis, the trade unionist said, adding that those at the helm of the judiciary would never have felt threatened by the far reaching constitutional amendment when it was approved in parliament with a two-thirds majority.

Lal Kantha pointed out the passage of the 18th Amendment was made possible by those who had switched their allegiance to President Rajapaksa after having contested the last parliamentary election in April 2010 through other political parties.

He said that the Supreme Court had sanctioned crossovers, thereby giving President Rajapaksa the wherewithal to pass legislation in parliament to suit the incumbent government’s agenda. Although the 1978 Constitution had created dictatorial tendencies, the then President JRJ Jayewardene, Ranasinghe Premadasa and Chandrika Kumaratunga could not really exploit the system as they were deprived of an opportunity to contest the presidency for a third time. Now, that that particular obstacle had been done away with the Rajapaksas would do as they pleased, Lal Kantha said, adding that all those who had contributed to the passage of the 18th Amendment realized their folly today.

Commenting on calls for repealing the 13th Amendment to the Constitution, Lal Kantha said that it would not have been an issue if not for the passage of the Amendment. The electorate should realize the grave danger the country was in due to the Rajapaksas’ political project. The country was rapidly moving towards a massive explosion, with the incumbent government going all out to centralise power in the hands of President Rajapaksa’s family.

The situation had been worsened due to the silence of the media due to strong arm tactics of those in power. None of those representing the UPFA were in a position to voice an opinion contrary to that of the executive, he said. Had anyone took a different view, he or she would have to face the consequences, the former MP said.