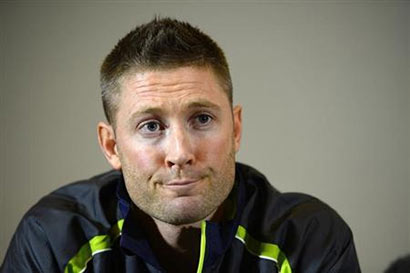 (Reuters) – Australia captain Michael Clarke hopes to be fit to return for Monday’s final Champions Trophy Group A game against Sri Lanka after missing the first two matches with a back injury.

“I’m hopeful, no doubt about that, but I really have to wait to see how I pull up tomorrow morning after training again today,” he told a news conference on Sunday. “My back is certainly improving, which is a positive.”

Australia lost their opener to England before their clash with New Zealand was rained off, meaning they sit bottom of the group with one point knowing defeat at the Oval on Monday will knock them out of the tournament.

Clarke’s recurring back trouble has led to speculation he could be a doubt for some of the five-test Ashes series in England which starts at Trent Bridge on July 10.

“Yes I’m confident (of playing in all of the Ashes), but I was confident I’d play every game in this series so you are asking the wrong guy,” he said.

England have their own injury worries for the Ashes with their most dangerous attacking batsman Kevin Pietersen missing the Champions Trophy because of a knee problem.

Pietersen told a fan on Twitter on Sunday that he would return to county four-day action for Surrey against Yorkshire on Friday.

Australia will be without batsman David Warner against Sri Lanka after he was banned until the first Ashes test for punching England player Joe Root in a bar.

Clarke said the squad had now moved on.

“The feeling in the camp has obviously been a little bit different…because of a little bit of disappointment in one of our players,” he said. “We left it there as a team and we look forward.”