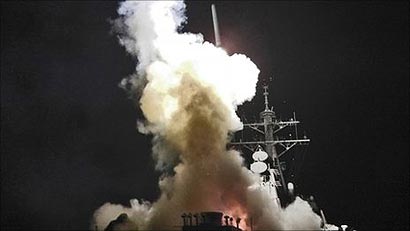 The UK, US and France have attacked Libyan leader Col Muammar Gaddafi’s forces in the first action to enforce a UN-mandated no-fly zone.

Pentagon officials say the US and the UK have fired more than 110 missiles, while French planes struck pro-Gaddafi forces attacking rebel-held Benghazi.

Col Gaddafi has vowed retaliation and said he will open arms depots to the people to defend Libya.

A French plane fired the first shots against Libyan government targets at 1645 GMT, destroying a number of military vehicles, according to a military spokesman.

US President Barack Obama, speaking during a visit to Brazil, said the US was taking “limited military action” as part of a “broad coalition”.

“We cannot stand idly by when a tyrant tells his people there will be no mercy,” he said.

He repeated that no US ground troops would take part.

After the missile bombardment and the air strikes, Col Gaddafi made a brief speech calling on people to resist.

“Civilian and military targets in the air and sea will be liable to serious danger in the Mediterranean,” he said.

“Arms depots are now open and the masses are being equipped with all sorts of weapons in defence of Libya’s independence, unity and honour,” the Libyan leader warned.

Later, state TV said 48 people were killed and 150 wounded in the attacks. There was no independent confirmation of the statement.

Britain’s Ministry of Defence said a British submarine and a number of Tornado jets fired missiles at Libyan military targets.

Libyan state TV reported that what it called the “crusader enemy” had bombed civilian areas of Tripoli, as well as fuel storage tanks supplying the western city of Misrata.

Sources in Tripoli told BBC Arabic that the attacks on the city had so far targeted the eastern areas of Sawani, Airport Road, and Ghasheer. These are all areas believed to host military bases.

After midnight on Sunday, heavy bursts of anti-aircraft fire arced into the sky above Tripoli and several explosions were heard.

The cruise missiles were fired from one British submarine and a number of American destroyers and subs, said a Pentagon official.

The action came hours after Western and Arab leaders met in Paris to agree how to enforce the UN resolution, which allows “all necessary measures” to protect civilians from forces loyal to Col Gaddafi.

Reports from the city said that government tanks and artillery had bombarded the city and there was fighting around the university.

Rebels in the city said thousands of people were fleeing the attack, heading east, and the UN refugee agency said it was preparing to receive 200,000 refugees from Libya.

Journalists later said the bombardment ended in the later afternoon and that rebel forces were in control of Benghazi.

The Libyan government blamed the rebels for breaking the ceasefire and said its forces had fought back in self defence.

French planes are reported to have hit government tanks and armoured vehicles around Benghazi.

In addition, Canada is sending warplanes to the region, while Italy has offered the use of its military bases. A naval blockade against Libya is also being put in place.

“In Libya, the civilian population, which is demanding nothing more than the right to choose their own destiny, is in mortal danger,” he warned. “It is our duty to respond to their anguished appeal.”

Shortly after the airstrikes began, Libyan state TV said a French plane had been shot down near Tripoli. However, French military officials said all their planes had returned safely.

Col Gaddafi has ruled Libya for more than 40 years. An uprising against him began last month after long-time leaders of neighbouring Tunisia and Egypt were toppled.