Colombo to be turned into a world class city 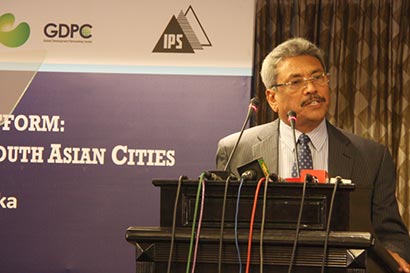 The ongoing development would see Colombo being transformed into a world-class city, that could be the centerpiece of Sri Lanka’s economic revival. At the same time, the government would also develop cities and towns in the rest of the country, Defence and Urban Development Ministry Secretary Gotabhaya Rajapaksa said yesterday.

“With the prevailing economic growth, a great deal of urban regeneration is very clearly taking place in Sri Lanka, in the capital city of Colombo as well as in the other cities and towns around the country,” he added

The Defence Secretary said although other cities such as Kandy, Galle, Jaffna and the fast emerging Hambantota also play important roles, making Colombo a world-class city remains a key priority of the government.

He was speaking at the launch of the South Asia Region Urbanisation Knowledge platform, a high-level policy workshop with the participation of urban development experts and decision makers from eight countries in the region at Cinnamon Grand Hotel, Colombo.

The Defence Secretary delivering the key note address under the topic ‘Challenges of Urban Development from a Sri Lankan Perspective’ noted, that as Sri Lanka has now achieved peace, a rapid development is taking place after many years of stagnation.

He pointed out that apart from the lives lost and the effect the conflict which lasted nearly three decades had on the society, its adverse impact on the economic development was tremendous.

Speaking on the challenges facing with regards to developing cities, he said that a very significant issue was the large number of people living in poorly constructed settlements, which was the result of migration of people from rural areas both due to conflict and for economic prospects. He said that most of them were occupying government lands and reservations set aside around lakes, canals, roadways and rail tracks. “These lack basic facilities and sanitation and the hygiene of the people are poor and criminal activity among them are rife and children undergo a lot of hardship,” he said. He also identified, improving and redeveloping infrastructure such as proper drainage systems, flood control systems, public and other recreational spaces, management of solid waste as other major challenges.

The Defence Secretary said that these problems were also compounded by the presence of unauthorised small boutiques that have been mainly set up on pavements, roads and reservations.

“We need to find a proper mechanism to enable them to retain their livelihoods, whilst relocating them so that they no longer obstruct roads and the proper maintenance of the city streets,” he added.

Speaking on the initiatives that Sri Lanka has taken with regard to urban development in the past few years, the Defence Secretary said a significant one was the rationalisation of the city of Colombo. He said that in accordance with a plan made 30 years ago, government buildings and offices were being moved out of Colombo to the adjacent administrative capital Sri Jayawardenepura, Kotte.

The work on the establishment of a central defence headquarters to house the Army, Navy, Air Force and the Defence Ministry too has started and developing Malabe as an educational hub has started, he added.

To further rationalise space utilisation in the city, the relocation of wholesale markets and other economic infrastructure to custom designed locations outside the city too is taking place. The fish market has been moved to Peliyagoda and Manning market too would be shifted there with the area being easily accessible through the outer circular highway and rail links from the Colombo port, he added.

On the settlement of shanty dwellers, he said that plans are already underway to provide quality housing with better community life facilities to over 70,000 families in high rise apartments close to their present dwellings.

A comprehensive flood prevention programme too is underway with dredging of lakes and canals, expanding water retention areas,

establishment of a micro drainage system being enacted, he added.

The Defence Secretary also added that while meeting all these development challenges, the government was also aware of the need to capitalise on the city’s natural and historic advantage.

Religious places, buildings and sites with historical value are been developed highlighting this heritage, he pointed out. The Defence Secretary said that the government has also paid special emphasis on improving the greenery of the city and the vitality of its public places and cited the ongoing development at Independence Square as a good example.

The spaces being developed will not only be accessible to the public, but also will be clearly visible to everyone and for this purpose walls covering such sites would be brought down and walkways would be constructed for public benefit, he said.

At the same time the government has also undertaken urban development programmes throughout the country, he added.

Mentioning the ongoing work in the former conflict affected areas, he said that even during troubled time, the government took steps to develop infrastructure in the East and the north.

“The on going work in Jaffna, Kilinochchi, Mankulam etc will result in the people of those areas gaining access to much higher quality of urban life,” he said. The event is organised by the World Bank and the Institute of Policy Studies in Sri Lanka. Representatives from India, Nepal, Bangladesh, Pakistan, Afghanistan, Maldives and Sri Lanka are attending the event.

Home » Colombo to be turned into a world class city