Commission of Inquiry on Indian War Crimes in Sri Lanka 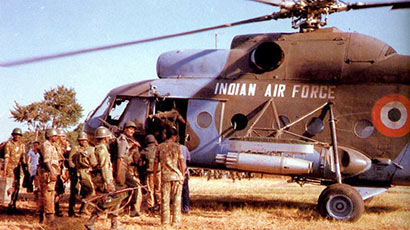 India demands Sri Lanka holds a “credible investigation”. Sri Lanka must oblige India. That investigation must cover two important aspects. Firstly, it must cover India’s role in creating, training, financing and supporting the LTTE as a terrorist movement and India’s war crimes committed on Sri Lankan citizens by the IPKF. Accountability for these massacres by the Indian IPKF needs to be included to the Presidential Commission of Inquiry. If US says the Resolution is an expression of support then the international community must support Sri Lanka to ensure India does not obstruct investigations into crimes by India. This is the conditionality with which the COI should commence under a clearly articulated mandate. RAW head said to Rajiv Gandhi “Don’t worry about the LTTE, they are our boys, they will not fight us(IPKF)” – LTTE fought back because IPKF were killing and raping Tamils in North Sri Lanka while a former Maj. Gen. of the Indian army declares Indian soldiers killed over 20,000 Tamil civilians in Northern Sri Lanka! IPKF prohibited the entry of international human rights organizations like Amnesty, ICRC from entering the North.

IPKF came to be called the Innocent People Killing Force because they killed civilians! IPKF was sent to Sri Lanka without the consent of the Indian Parliament.

The scale of crimes committed by Indian troops in Sri Lanka has gone unnoticed. Prabakaran himself said that it was the atrocities committed by the IPKF that contributed towards his decision to kill Rajiv Gandhi in 1991. This corroborates with Former LTTE military commander turned Minister V. Muralitharan or Karuna Amman who claims that the LTTE female cadre who killed Rajiv had been raped by the IPKF. While even the Supreme Court of India in its verdict claimed that the Rajiv assassination was a retaliation for the IPKF atrocities against Tamils in Sri Lanka.

The background to the arrival of the IPKF is simple. On 26 May 1987, Prabakaran was cornered in Vadamarachchi and would have been caught by the Sri Lankan troops had India not intervened to threaten military intervention if Prabakaran was not released. Thereafter, Prabakaran was flown by Indian plane to India and to show India meant business, India violated Sri Lanka’s airspace dropping 25 tons of food in the North. The irony is that while no Sri Lankan has ever to date died of hunger hundreds die in India without food.

The international community has yet to speak on India’s role in birthing and nursing the LTTE. Part of that blames falls upon Sri Lanka’s Government and its failure to set the story straight. The root cause of the conflict is India and unless the Sri Lankan Government is brave enough to say so all these accountability and reconciliation is useless. Reconciliation cannot conceal India’s treacherous role to destabilizing and take over Sri Lanka. Sri Lanka must not shy from telling the world the truth. Indian media pointing fingers from Delhi certainly needs to wake up to this reality and an apology to Sri Lanka is certainly forthcoming.

· Training, arming, financing and functioning as a state sponsor of terrorism in view of its training LTTE on Indian soil using former Indian army personnel and RAW.

· These Indian trained LTTE and other Tamil militant groups have killed scores of Sinhalese, Tamils and Muslims. For every murder, assassination and destruction of property LTTE has committed over 30 years India stands equally culpable. If LTTE stands trial so must India.

· IPKF Indian forces not only killed scores of Sri Lankan Tamils but raped, looted, tortured and took part in indiscriminate shootings. This “killing field” is forgotten and ignored given that the main perpetrator is India. LTTE would not have become what it became if not for India.

· The allegations of civilian killings by IPKF on Sri Lankan Tamils is said to range from 6000 to 20,000 (Maj.Gen. Mehta – retired Indian army) – http://news.oneindia.in/2009/06/01/exipkf-general-accuses-india-of-killing-20000-lankantamil.html – these deaths need to be accounted for and a credible investigation can prove India’s war crimes and genocide.

· Indian IPKF role in displacing thousands of Sri Lankan Tamils also need to be investigated. Ironically no foreign Government, UN, Tamil Nadu, TNA nor any humanitarian organization challenged India or the IPKF. 50,000 is said to have been displaced at the height of IPKF artillery shelling. Is this why India has promised to build 50,000 houses as a resettlement offer?

· Allegations of rape of Sri Lankan women by Indian forces was brushed aside as “the Indian army are not angels….rape happens even in the West” – Brig Kahlon. Some of these very officers in the IPKF are today championing human rights!

It needs to be reiterated that whilst India continuously insists on safety, dignity and integrity of the Tamil people while Indian troops were running amok killing and raping Sri Lankan Tamils, India prohibited external players – no journalists were allowed and no humanitarian organizations were permitted to the North.

Sri Lanka’s Presidential Commission of Inquiry must investigate on all the training camps set up by the Indian Government, assisted by RAW and the former Indian army personnel that trained LTTE and numerous other Tamil militant groups from Sri Lanka.

The Inquiry must cover the Tamil Nadu links with the LTTE inclusive of its politicians. It must also look into the international organizations that also had links with LTTE and their local stooges. Every area that prolonged the conflict from ending in view of their links to LTTE must now come into the open. This is what accountability is and only this will pave way towards genuine reconciliation. Indian Penal Code does provide for extradition and Sri Lanka can open trial according to Sri Lanka’s laws.

India deserves no seat in the UN Security Council if its atrocities of state sponsored terrorism is proved on Sri Lanka and upon all of India’s neighbors. Indian Government continuously has been preventing war crimes investigations of India’s war crimes in South Asia region.

Some words of advice to Sri Lanka’s present leaders who seem to be naïve to think we can expect better of India no matter how many times India ends up “disappointing us”.

“If victory was to be achieved, it could not be done by uniting all opposing forces but by dividing them and creating dissension among them… Sri Lankan Kings never opposed the entirety of India. When there was conflict with the Pandyans, they sought the aid of the Cholas and acted against the Pandyans. When the Pandyans and Cholas combined, they sought the aid of Kalinga. Sinhala Kings had that high intelligence and knowledge of statecraft.“ – National Security Minister Lalith Athulathmudali -27 May 1984