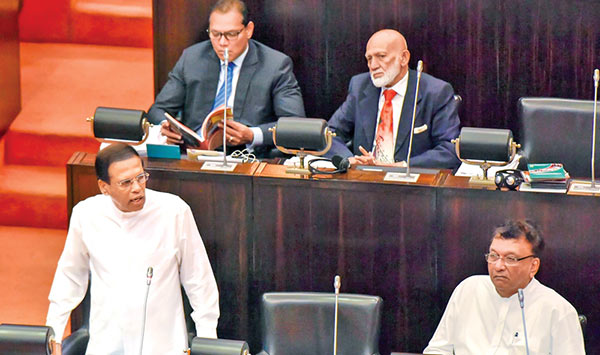 President Maithripala Sirisena said a comprehensive drug prevention programme would be initiated, adding that the government does not intend to increase state income through cigarette and alcohol sales, adding that based on the government’s drug policy, it is not suitable to grant concessions to any form of alcohol, cigarette or any other intoxicant.

He said as a government all possible measures would be taken to uplift the free health service, free education and agricultural sectors.

The President made this statement in Parliament yesterday joining the Committee Stage debate on the financial heads of the Health, Nutrition and Indigenous Medicine Ministry and Housing and Construction Ministry.

He said the people of this country do not have to bear the burden of health and education as it is provided free. “During the past few years we have made great strides in the Health and Education sectors. Hence. As a nation we can be proud of this achievement.

“As a former Health Minister I know the pressure I was under, but today the Health Minister is lucky to be able to work freely without any pressure, as I have given him the space to carry out his duties as the Health Minister. He has also done a commendable job during the past three years, to uplift the health sector,” the President said.

“But today, there is no limit put on the value of a life and nowhere has a limit been imposed. Cancer patients can now get the best treatment without having to worry about the costs. We are fortunate to have good doctors, nurses and other support staff in the health sector. It is due to their commitment that we have been able to gain praise even from the WHO,” the President said.

The President said work is to commence on the construction of a kidney hospital in Polonnaruwa with Chinese aid at a cost of $ 12000 million. The Chinese government had pledged to construct this hospital during President Sirisena’s first official visit to China as the President.

“Further, during my official visit to Australia last year, I observed the great success Australia has gained in the health sphere through nuclear technology and requested their expertise for Sri Lanka, which they obliged. Hence we signed an agreement and the benefits of this effort will also be seen in the near future,” he said.

He said two hostels are currently being constructed in Kandy and Anuradhapura for the guardians of cancer patients to be accommodated while the patients are undergoing treatment.Further, water purification units have been set up in many parts of the country, courtesy of the Navy and other donors.

Meanwhile, the President also commended the Housing and Construction Minister for implementing an excellent programme in providing housing facilities for the homeless in the country.