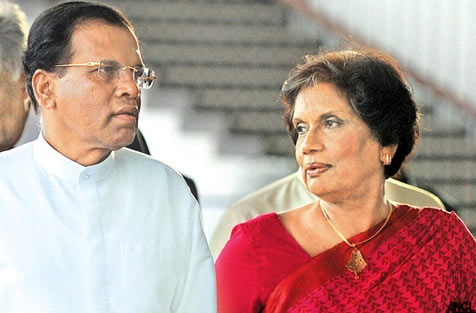 President Maithripala Sirisena, after lengthy negotiations with different stakeholders of the UPFA, has agreed to offer conditional nominations for former President Mahinda Rajapaksa.

According to conditions laid out by the President, Rajapksa should only contest from Hambanthota and he will not be named as the Prime Ministerial candidate of the UPFA. In addition, he will not be appointed as the head of the campaign or the district leader, informed party sources told the Daily News last night.

President Sirisena had also declined to give any promise that Rajapaksa would be appointed as the Prime Minister even if the UPFA secured a majority at the Parliamentary election. The President had said that a decision would be made on the Prime Minister after the election, based on the preference of the MPs.

“According to the conditions, former President Rajapaksa will have to remain in Parliament as an ordinary MP if he doesn’t get appointed as the Prime Minister,” a strongman of the SLFP, who was privy to discussions on Tuesday, told the Daily News.

Meanwhile, a section of staunch supporters of the former President will not receive nominations to contest under the UPFA ticket.

Sajin Vaas Gunawardena, Duminda Silva, Mervyn Silva and Premalal Jayasekera will not receive nominations on the grounds that bribery, corruption and criminal charges have been leveled against them.

The President has opposed giving nominations to Rohitha Abetgunawardena, Johnston Fernando, Lakshman Wasantha Perara and Mahindananda Aluthgamage. However, the pro-Rajapaksa group has now embarked on a feverish mission to get the President’s consent to give nominations to the four ex-Parliamentarians.

A fresh issue has emerged in the SLFP over national list slots. Professor G.L. Pieris, Anura Priyadarshana Yapa, Susil Premajayantha, Dullas Alahapperuma, Dilan Perera and several key members from the constituent parties of the UPFA have expressed willingness to come from the National List, without contesting the election.

This move has met with heavy resistance from President Maithripala Sirisena and former President Chandrika Bandaranaike Kumaratunga who are of the view that professionals and intellectuals should be given more space in the national list.

Speaking to the Daily News, members of the Rajapaksa camp said Rajapaksa was expected to sign nomination papers today (July 08) or tomorrow (July 9).

7 Responses to Conditional nominations for MR