Controversy over proposal to merge Litro with debt-ridden LAUGFS 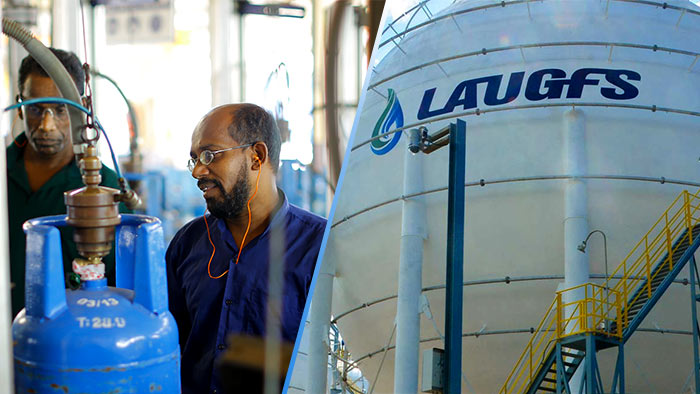 A Government proposal for State-owned Litro Gas Lanka Ltd to buy 40 percent equity in the private LAUGFS Gas Terminal International Company (LGTIC) that operates a tank farm in Hambantota will go to Cabinet for approval tomorrow amidst controversy.

The public-private partnership (PPP) deal reported exclusively in the Sunday Times last week, is seen by critics as the “Government bailing out LAUGFS” whose terminal project has incurred debts to the tune of Rs 12.12bn to the Bank of Ceylon and of Rs 10.1bn to the People’s Bank. Both are State-owned entities and have said they cannot lend anymore to LGTIC.

Official sources insisted that it was “a good restructuring initiative”. “Litro is corrupt and makes money out of spot buying with only three days of stock capacity,” a senior Government source alleged. “The LAUGFS terminal in Hambantota has a capacity of 60,000 metric tonnes to meet domestic demand and export to four countries.”

“Taking at least 40 percent equity in the terminal will allow a joint venture operation with a new management structure,” he said. “Valuation for the terminal will be based on the Government valuer’s assessment. The direct purchase agreement will reduce cost by 60 percent. And revenue from the sale of 40 percent of equity by LAUGFS will be used to retire debt, thereby helping LAUGFS and the banks.”

The proposal does not apply to LAUGFS Gas PLC which supplies 30 percent of the Sri Lankan market (Litro meets the remaining 70 percent of demand). It continues to incur huge losses in recent years as the Consumer Affairs Authority has refused to allow price revisions and because of a drastic depreciation of the rupee against the dollar, its Chairman W.K.H Wegapitiya said.

The Cabinet proposal envisages Litro–a subsidiary of the Government-owned Sri Lanka Insurance Company (SLIC)–buying a minimum one-third of equity in LGTIC, securing Board of Directors positions and management participation. The company’s debt exposure to the two banks will be retired. Litro Gas will terminate its procurement contracts and enter into new arrangements jointly with LAUGFS Gas.

Mr Wegapitiya said he did not request such a deal and that it was floated by the Government after he approached the President last year pleading to be allowed to raise prices. Having studied the Cabinet paper, however, he supported the proposal but had not been offered anything yet in writing.

Litro and LAUGFS have lobbied the Consumer Affairs Authority (CAA) continuously to be allowed to increase gas prices as they were selling well below cost, the Chairman said. This was not allowed. After approaching several minister, Mr Wegapitiya said he took the matter to President Gotabaya Rajapaksa, asking for either a price hike or a subsidy.

The President requested officials to study the problem and float a solution. What emerged was a PPP. “This was not my proposal but the Government’s,” he reiterated. “What I wanted was a price increase. They worked out the proposal internally and there has been no official communication to me.”

“People are saying I’m in debt and trying to be rescued because I cannot manage the institution,” he continued. “No, it’s a regulatory bottleneck that is destroying companies. I’m losing because of their policy decisions, their problems.”

Gas prices are seen as political issues and they are tied up with the cost of living. The Government has repeatedly promised that it would not allow the prices to rise. The new proposal is also being seen as a means of keeping prices stable. “A price revision could be avoided if the industries are well-structured to use synergies of both companies,” the Cabinet paper says.

The international transportation cost could also be reduced, it states, if the requirements of Litro and LAUGFS are brought into Hambantota in a single shipment. It cites various other factors that will help control price. And a domestic 12.5kg cylinder will continue to cost Rs 1,493.

But critics warn, “Tying up capital to a white elephant asset will have an adverse effect on the cash flow of Litro.” “What you need to do is adjust prices,” a source said, requesting anonymity. “They don’t need additional capacity. LAUGHFS’s exposure to the State banks is not our problem.”

“Litro has capacity to hold 8,000MT of gas,” he said. “We don’t need the full amount all the time. And if worse comes to worst, they can lease tanks from LAUGFS. Also, LAUGFS Terminal secured a tax exemption to sell gas abroad. Now they’re trying to sell the gas locally and get the same exemption.”

He also questioned why Litro will get just a 40 percent stake. “If LAUGFS is broke, Litro must take the bigger share,” he insisted. “The rescuer must get the bigger share. Also, SLIC cannot make investments, especially long-term ones like this, without proper viability reports because this money belongs to the insured.”

Others questioned the logistical viability for Litro of having storage in Hambantota as its filling plant is in Kerawalapitiya. The company has even acquired nearby lands to expand storage. The majority of its customers are in the Western and adjoining provinces.

“Acquiring this tank farm will create massive losses to Litro similar to the fate of LAUGFS,” one industry source said. “Drying up the cash flow of Litro will have a knock-on effect on product purchasing, risking LPG shortages in the country.”

Home » Controversy over proposal to merge Litro with debt-ridden LAUGFS