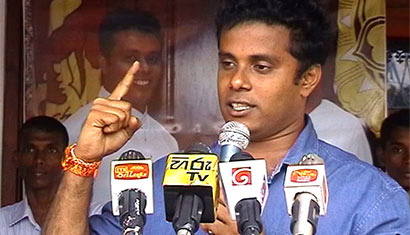 The arrest warrant was issued by Matara Chief Magistrate Ruwan Sisira Kumara when the former Provincial Councilor had failed to appear at court today to testify over the clash between UNP supporters which had taken place in Matara on October 05, 2013.

A protest march against UNP Leader Ranil Wickramasinghe, led by former Provincial Councilors Maithri Gunaratne and Shiral Lakthilaka – who were both sacked from the party, had commenced from Devinuwara while another demonstration led by MP Mangala Samaraweera in support of the UNP leader began from Wellamadama.

However, a tense situation arose when both groups reached the Matara Town, resulting in the hospitalization of 7 persons, including Mr Pushpakumara who was shot in the leg.

Krishantha Pushpakumara, who is contesting for the Southern Provincial Council under the ruling UPFA, was issued notice to appear before the court today and testify regarding the case.

However, he had failed to appear before the court prompting the Matara Magistrate to issue a warrant for his arrest. (Ada Derana)