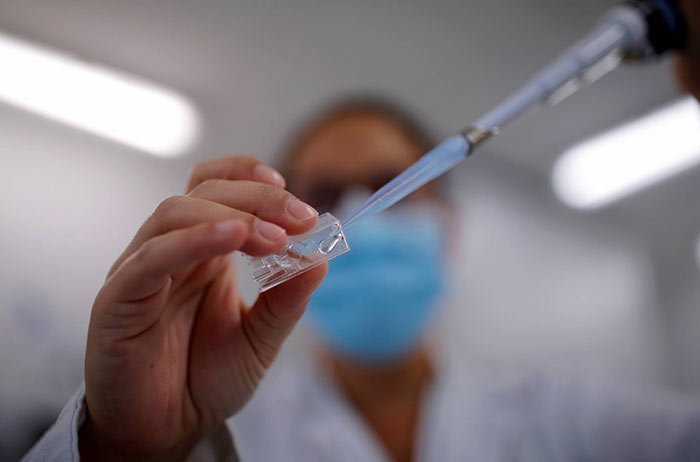 A researcher manipulates proteins in a laboratory as part of a project to develop a COVID-19 nasal spray vaccine that could protect against the deadly disease, at the University of Tours in France on Wednesday. | REUTERS

Could delivering COVID-19 immunity directly to the nose – the area of the body via which it is most likely to be transmitted – help conquer the pandemic? The World Health Organization says clinical trials are underway to evaluate eight nasal spray vaccines that target COVID-19.

The most advanced effort so far by China’s Xiamen University, the University of Hong Kong and Beijing Wantai Biological Pharmacy has completed phase-2 trials.

“When the virus infects someone it usually gets in through the nose,” said researcher Nathalie Mielcarek who is working with the Lille Pasteur Institute to develop a nasal spray vaccine against whooping cough.

“The idea is to shut the door.”

An article published in Scientific American in March urged developing nasal spray vaccines because they have an immediate effect on the virus in an infected person’s mucus.

There they trigger production of an antibody known as immunoglobulin A, which can block infection.

“This overwhelming response, called sterilising immunity, reduces the chance that people will pass on the virus,” said the article.

The vaccines currently available offer strong protection against severe forms of COVID-19 but are less reliable at preventing the spread of the virus.

Stimulating immunity directly in the nose “lowers the risk of infecting other people”, said Mielcarek.

“From there you have less of the virus infecting the lungs and so fewer severe cases since the viral load is lower,” she added.

An article published in March by Gavi the Vaccine Alliance noted other advantages, including the fact that the sprays don’t need refrigeration and don’t need to be administered by health professionals.

“People would be able to self-administer them at home,” the article says, adding “they are likely to be more popular for the millions of people who don’t like needles”.

And in a French study on mice presented last week, 100% of subjects vaccinated with the spray survived infection by COVID-19 while all unvaccinated mice died.

“The vaccinated animals… showed low levels of the virus so they are not contagious anymore – that’s one of the advantages of the nasal spray,” Philippe Mauguin, CEO of the French institute that hopes to patent the vaccine told AFP.

Isabelle Dimier-Poisson who led the research has high hopes.

“It could allow us to get back to life before the pandemic, without social distancing, and without masks,” she said.