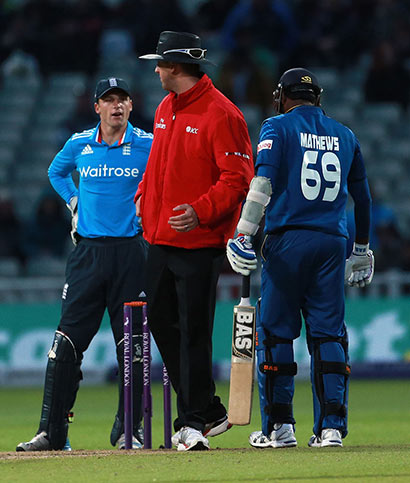 England captain Alastair Cook said he expected the controversial run out of Jos Buttler during the fifth one-day international against Sri Lanka to “spice up” the forthcoming Test series between the teams.

Cook insisted a “line had been crossed” after Sachithra Senanayake ran out England’s Jos Buttler as the non-striker backed up during Sri Lanka’s 3-2 series-clinching six-wicket win in the fifth and final one-day international at Edgbaston on Tuesday.

Sri Lanka captain Angelo Mathews, asked by the umpires if he wanted to uphold what was a legitimate appeal, didn’t call Buttler back and the wicketkeeper, whose blistering 121 had so nearly taken the hosts to victory in their seven run fourth ODI defeat at Lord’s on Saturday, was out for 21.

“I’ve never seen it before in a game,” Cook told a post-match press conference.

“I was pretty disappointed with it to be honest with you. You don’t know what you’d do if you were put in that situation, the heat of the moment, until you are. I’d hope I wouldn’t do it.”

But Sri Lanka captain Angelo Mathews insisted Buttler had been repeatedly warned before Senanayake took the bails off to send Buttler on his way.

This was only the eighth reported instance of a batsman being run out backing up in an international match and the first since South Africa’s Peter Kirsten was dismissed by India’s Kapil Dev in a one-day international at Port Elizabeth in 1992/93.

Yet even though ‘Mankading’, the term coined after India’s Vinoo Mankad ran out Australia non-striker Bill Brown during the 1947/48 Sydney Test, remains a legitimate dismissal, there are those who regard it as against the ‘spirit of cricket’.

“This is just different,” said Cook. “For some reason it’s different. In my opinion there’s a line and that line probably, I think, was crossed today (Tuesday).”

“If he (Buttler) was properly trying to steal a single, I could possibly understand it.”

England and Sri Lanka meet in the first of two Tests at Lord’s next week and Cook added: “Probably, it (the run out) will spice it up a bit, there’s nothing wrong with that. It’s just important you let your cricket do the talking as well.”

The fact it was Senanayake, reported on suspicion of a suspect action by the umpires at Lord’s but was still allowed to play in this match under International Cricket Council rules at Edgbaston, who ran Buttler out only added to the row.

But senior Sri Lanka batsman Mahela Jawywardene, who made 53 as the tourists chased down a target of 220 which Cook, for all the Buttler furore, admitted was “20-odd runs short on that wicket”, insisted Senanayake had done nothing wrong in dismissing Buttler and defended he off-spinner’s action.

“We gave him (Buttler) a fair chance twice — before the first warning as well, we told the umpires that they’re taking too much of a lead,” Jayawardene said.

“He (Buttler) was told not to take a start and then warned again, so it’s fair enough.

“At Lord’s, they took 22 twos in the last 12 overs. Ravi (Bopara) and he ran riot, and most of the time they were taking starts — which was not legal by the written law.”

As for the reporting of Senanayake, initiated by umpires Ian Gould (England) and Marais Erasmus (South Africa), Jayawardene said: “We are disappointed as a group.

“Unfortunately the skills of our guys, good skills … are being questioned.

“Sachi’s a fantastic young player in the group, we had a special dinner for him last (Monday) night.”

And he insisted Senanayake’s omission from the Test squad had nothing to do with the controversy over his action.

“We don’t pick Sachi for the Test squad but we have another spinner (Dilruwan Perera).

“It has no bearing on his (Senanayake’s) selection for the Test team. He’s a one-day specialist and a T20 guy.”